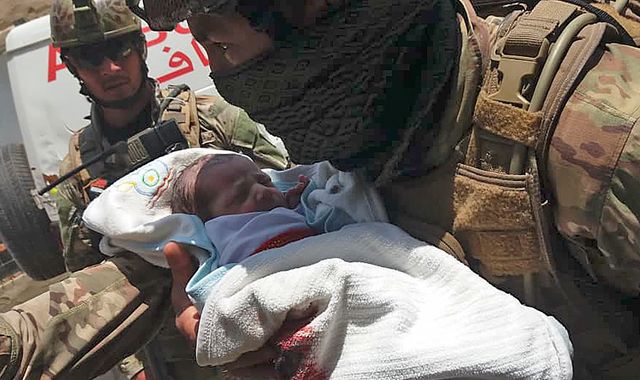 Three women in the delivery room with their unborn babies were among 11 mothers killed in an attack on a maternity hospital in Kabul last week, a charity has said.

Médecins Sans Frontières (MSF) has accused gunmen of intentionally targeting mothers in the assault on 12 May that also left two young boys and a midwife dead.

In total, 24 people were killed and at least 20 more wounded, including five mothers and two new-born babies.

"I went back the day after the attack and what I saw in the maternity demonstrates it was a systematic shooting of the mothers," said Frederic Bonnot, MSF's head of programmes in Afghanistan.

"It was methodical. Walls sprayed with bullets, blood on the floor in the rooms, vehicles burnt out and windows shot through."

The targeting of a maternity hospital marked a brutal, new depth of horror, even for a country that has known little but war for the past four decades.

No one has yet claimed responsibility for the attack.

The Taliban denied involvement, though suspicion remains, while there have also been reports it was carried out by militants linked to Islamic State.

It comes at a time of spiralling bloodshed even after the United States attempted to set the scene for reconciliation by signing a peace deal with the Taliban earlier this year.

MSF said a total of 26 mothers had been at the Dasht-e-Barchi hospital when an as-yet unknown number of gunmen launched their assault at about 10am.

Ten of the women were able to find shelter.

The attackers could have targeted other parts of the facility, but witnesses said they went straight to the maternity ward, which is supported by the international charity.

"What ensued was four hours of hell - that is how long the attack lasted, while patients and staff alike looked for shelter," said Mr Bonnot.

A number of people were able to shelter inside a safe room.

"During the attack, from the safe room, we heard shooting everywhere and explosions too," Mr Bonnot said.

"It's shocking. We know this area has suffered attacks in the past, but no one could believe they would attack a maternity ward. They came to kill the mothers. This country is sadly used to seeing horrific events. But what happened on Tuesday is beyond words."

There were over 100 MSF staff working in the hospital at the time of the attack, including a small number of foreign personnel.