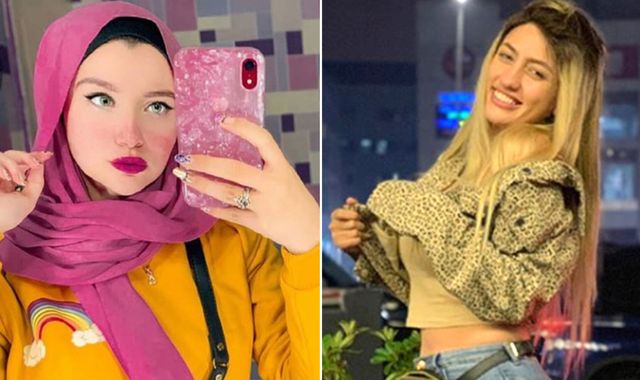 Five TikTok influencers have been jailed in Egypt for posting "indecent" videos on the social media platform.

The young women have been sentenced to two years in prison for "violating the values and principles of the Egyptian family", inciting debauchery and promoting human trafficking, according to a statement from the public prosecutor.

Human rights activists say it is the latest crackdown on self-expression in the conservative country, where citizens can be jailed for crimes such as "misusing social media", "disseminating fake news" or "inciting debauchery or immorality".

Ms Hossam and Ms Eladhm shot to TikTok fame with their videos set to Egyptian pop tracks, earning them millions of followers.

In the videos, they are seen posing in cars, dancing in kitchens and joking in skits.

Cairo University student Ms Hossam was charged over encouraging young women to meet men through video app Likee and build friendships with them for a fee.

Authorities claimed the video was a promotion for young women to sell sex online.

The 20-year-old, who has about one million followers on TikTok and Instagram, was originally arrested in April and released on bail in June.

She was re-arrested after the prosecution found new evidence.

Ms Eladhm, a TikTok and Instagram influencer, was accused of publishing indecent photos and videos on social media.

Her photos and videos were described by the prosecution as "disgraceful and insulting".

The 22-year-old's legal team confirmed the sentencing and said she had been "crying in court".

The three other women were charged with helping Ms Hossam and Ms Eladhm manage their social media accounts.

The women will be appealing against the verdicts.

Nehad Abu El Komsan, head of the Egyptian Center for Women's Rights, said she did not agree with the phrase "violating family values and principles" but viewed human trafficking and exploiting young girls for money as a "horrible crime".

"We have to differentiate between freedom of expression and using minors to generate money. In this way, it is called human trafficking and prostitution which are banned by the Egyptian law," she said.

There have been a string of arrests for "moral issues" in recent years in Egypt, with the clampdown on personal freedoms accelerating since President Abdel Fattah el Sisi came to power in 2013.

A widely-circulated petition against the influencers' arrests described them as a "systematic crackdown that targets low-income women".