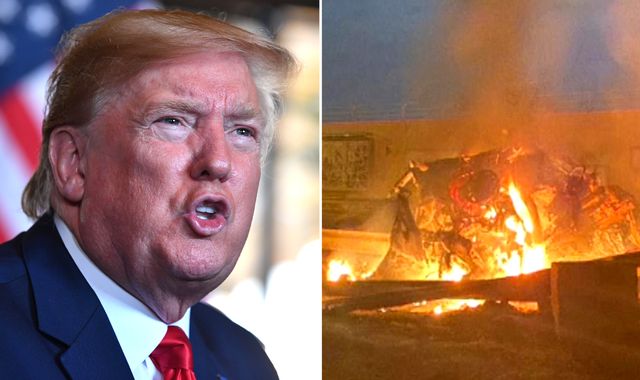 President Donald Trump authorised the killing of Iranian Major General Qassem Soleimani seven months ago if Iran's increased aggression resulted in the death of an American, according to five current and former senior administration officials.

The presidential directive in June came with the condition that Mr Trump would have final sign-off on any specific operation to kill Maj Gen Soleimani, officials said.

That decision explains why assassinating the general was on the menu of options that the military presented to Mr Trump two weeks ago for responding to an attack by Iranian proxies in Iraq, in which a US contractor was killed and four US service members were wounded, the officials said.

The timing, however, could undermine the Trump administration's stated justification for ordering the US drone strike that killed Soleimani in Baghdad on 3 January.

Officials have said Maj Gen Soleimani, the leader of the Islamic Revolutionary Guard Corps' elite Quds Force, was planning imminent attacks on Americans and had to be stopped.

"There have been a number of options presented to the president over the course of time," a senior administration official said - adding that it was "some time ago" that the president's aides put assassinating Maj Gen Soleimani on the list of potential responses to Iranian aggression.

After Iran shot down a US drone in June, John Bolton, Mr Trump's national security adviser at the time, urged him to retaliate by signing off on an operation to kill Maj Gen Soleimani, officials said.

But Mr Trump rejected the idea - saying he'd take that step only if Iran crossed his red line: killing an American.

The president's message was "that's only on the table if they hit Americans", according to a person briefed on the discussion.

Neither the White House nor the National Security Council responded to requests for comment.

Mr Bolton and the State Department also did not respond to requests for comment.

When Mr Trump came into office, Mr Pompeo, who was Mr Trump's first CIA director, urged the president to consider taking a more aggressive approach to Maj Gen Soleimani after showing him new intelligence on what a second senior administration official described as "very serious threats that didn't come to fruition".

The idea of killing the general came up in discussions in 2017 that Mr Trump's national security adviser at the time, retired Army Lieutenant General H.R. McMaster, was having with other administration officials about the president's broader national security strategy, officials said.

But it was just one of a host of possible elements of Mr Trump's "maximum pressure" campaign against Iran and "was not something that was thought of as a first move", said a former senior administration official involved in the discussions.

The idea did become more serious after Lt Gen McMaster was replaced in April 2018 by Mr Bolton, a longtime Iran hawk and advocate for regime change in Tehran.

Mr Bolton left the White House in September - he said he resigned, while Trump said he fired him - following policy disagreements on Iran and other issues.

White House officials at the time refused to say whether that meant the US would target Revolutionary Guard leaders as it does the leadership of other terrorist groups, such as the Islamic State militant group and al Qaeda.

Iran retaliated by designating the US military a terrorist organisation.

The actions underscored the rising tension between the US and Iran in the three years since Mr Trump took office.

Since Mr Trump withdrew the United States from the Iran nuclear deal in 2018 - and his administration tightened its squeeze on Iran's economy with punishing economic sanctions - Iran has attacked US military assets in Iraq with increasing aggressiveness and frequency.

Iran has launched more than a dozen separate rocket attacks on bases housing Americans since October.

The US military blamed Kataib Hezbollah, an Iraqi militia that is part of the Popular Mobilization Forces, but is backed by Iran.

US military and intelligence officials say the group takes direction from Iran, specifically the Quds Force.

A US military official in Iraq said the rockets Iran has launched at US forces have become more sophisticated over time.

The largest attack was on 27 December, when Kataib Hezbollah launched more than 30 rockets at an Iraqi base in Kirkuk, killing a US contractor and wounding four US service members.

After the attack, the United States launched airstrikes against five Kataib Hezbollah locations, three in Iraq and two in Syria, targeting ammunition and weapon supplies, as well as command and control sites.

Mr Trump signed off on the operation to kill Maj Gen Soleimani after Iranian-backed militia members responded to US strikes by storming the US Embassy compound in Baghdad.

Iran responded to the assassination of Maj Gen Soleimani by striking bases housing US forces in Iraq, and after no Americans were killed, Trump appeared to back off further military conflict.

Instead, he announced new sanctions against Iran on Friday.