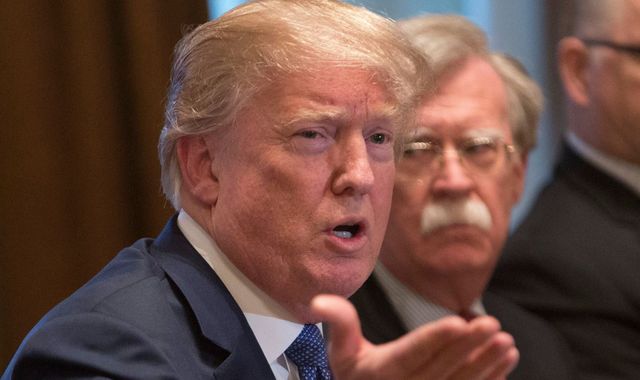 Republican senators have blocked a move by Democrats to compel Donald Trump's former national security adviser John Bolton to appear as a witness in the impeachment trial.

In an early sign of partisanship, the Republican-controlled Senate rejected several Democrat bids for more witnesses to expose the US president's alleged abuse of power and the covering-up of his actions.

Republicans also turned back Democratic amendments to subpoena documents from the White House, State Department, Defence Department and budget office, as the first day of proceedings continued into the early hours of Wednesday.

They voted against compelling Mr Bolton and acting White House chief of staff Mick Mulvaney - both with front-row seats to the president's actions - to give evidence at the historic trial.

By the same 53-47 party-line, the Republicans banded together to adopt their rules governing the proceedings, including delaying a debate over whether to call witnesses until the middle of the trial.

The president, who is 4,000 miles away from Washington in Davos, Switzerland, is charged with abuse of power and obstruction of Congress after investigations by the lower House of Representatives, which the Democrats control.

Mr Trump is accused of freezing Congress-approved aid to pressure Ukraine to investigate former Democratic Vice President Joe Biden, a political rival, and impeding the inquiry into the matter.

Adam Schiff, a California Democrat, leading the prosecution, said America's founders had added the remedy of impeachment in the US constitution with "precisely this type of conduct in mind - conduct that abuses the power of office for a personal benefit, that undermines our national security, and that invites foreign interference in the democratic process of an election".

But White House Counsel Pat Cipollone, the president's lead lawyer, said the charges against Mr Trump were "ridiculous", insisting the president had done "absolutely nothing wrong".

Mr Bolton, a foreign policy hawk, was sacked by Mr Trump in September with the pair having significant disagreements on Iran, Afghanistan and other global challenges.

Earlier this year, he issued a statement on Mr Trump's impeachment, saying that if he was compelled to, he would give evidence at the trial.

"If the Senate issues a subpoena for my testimony, I am prepared to testify," he wrote.

The final impeachment vote in the Senate, which will decide whether Mr Trump is guilty, is expected to be along party lines and it is therefore unlikely the president will be removed from office.