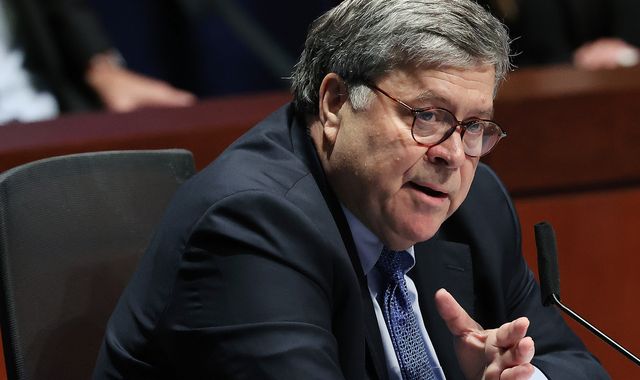 US attorney general William Barr has rejected accusations that he has "aided and abetted" Donald Trump.

At the start of a long-anticipated hearing with the House Judiciary Committee looking into whether the US Justice Department has become politicised, chairman Jerrold Nadler told Mr Barr there had been a "persistent war against the department's professional core" that had been an "apparent effort to secure favours" for Mr Trump.

He said the department had, under Mr Barr's tenure, been "twisted" into a "shadow of its former self" by looking after the most powerful, and added that the committee needed to protect citizens "from that kind of corruption".

The department is currently facing criticism for a number of decisions, including the sending of federal agents to disperse protesters in Portland, Oregon, and Washington DC, and for other action to help the president's associates.

But Mr Barr repudiated the claims on Tuesday, saying he felt he had "complete freedom to do what I feel what is right".

He also said he did not deploy federal agents to help with Mr Trump's re-election campaign, and denied aiding Mr Trump's associates - saying they do not deserve either special nor harsher treatment.

"Many of the Democrats on this committee have attempted to discredit me by conjuring up a narrative that I am simply the president's factotum who disposes of criminal cases according to his instructions," he said.

"Judging from the letter inviting me to this hearing, that appears to be your agenda today."

The inquiry comes after Mr Barr's intervention in several high-profile cases that involved people connected to the US president, including his decision to pull back a sentencing recommendation for Mr Trump's friend Roger Stone.

Turning to the recent protests, which have been widespread and largely peaceful in the wake of the death of George Floyd, the attorney general defended his decision to deploy federal agents - insisting this was not to boost Mr Trump's election chances.

He told the committee that violence in Portland was not connected to the demonstrations for Mr Floyd, and that it was actually evidence of "violent rioters and anarchists" who had "hijacked legitimate protests".

"Largely absent from these scenes of destruction are even superficial attempts by the rioters to connect their actions to George Floyd's death or any legitimate call for reform," he said.

Mr Floyd's death, Mr Barr added, was "horrible" and had rekindled concerns around how America's black population is treated differently by law enforcement.

But in response to Mr Barr's earlier comments that also paid respect to the late civil rights hero John Lewis, US Representative Cedric Richmond said it was "systematic racism" that the attorney general did not have any black people on his staff.

He said: "That, sir, is systematic racism. That's exactly what John Lewis spent his life fighting.

"And so I would just suggest that actions speak louder than words, and you should really keep the name of the honourable John Lewis out of the Department of Justice's mouth."