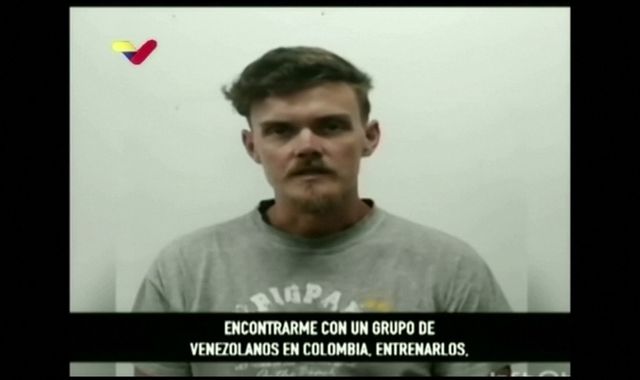 Venezuela has released a new video of two US mercenaries captured after the recent bid to oust President Nicolas Maduro.

The footage was broadcast on Venezuelan state television and shows US airmen Luke Denman and Airan Berry talking about the botched coup on 3 May.

Both men have apparently admitted they took part in "Operation Gideon" organised by former US special forces soldier Jordan Goudreau to "liberate Venezuela" in exchange for a personal reward of $100,000 (£81,700).

In the new clip, Mr Denman says he "didn't sign a contract" with ex-Green Beret Mr Goudreau, but his instructions were: "To train the Venezuelans in Colombia... to secure an airfield and put Maduro on a plane."

He said the risk of the operation was "pretty high", adding: "We were, for all intents and purposes, invading the country, taking military and police targets and capturing the sitting president."

Mr Denman and Mr Berry, who are both from Texas, are currently being held in Venezuela and may have been talking under duress for the clip.

They were among 34 people captured in the attempt to overthrow Mr Maduro, who blames the US and Colombian governments for the attack, as well as the Venezuelan opposition leader Juan Guaido.

Washington and Bogota deny the accusations. They are are among some 60 countries that recognise Mr Guaido as the country's interim president amid claims Mr Maduro rigged elections.

Eight people were killed in the incident, which took place in La Guaira, 20 miles from the capital Caracas.