Social media has become a battleground post-Brexit, but James O'Brien says no amount of Winnie the Pooh memes will fix the genuine fears people have.

This meme has been shared by thousands on Facebook in a bid to put anxious Remain voters at ease - but it's had the opposite impact on James. 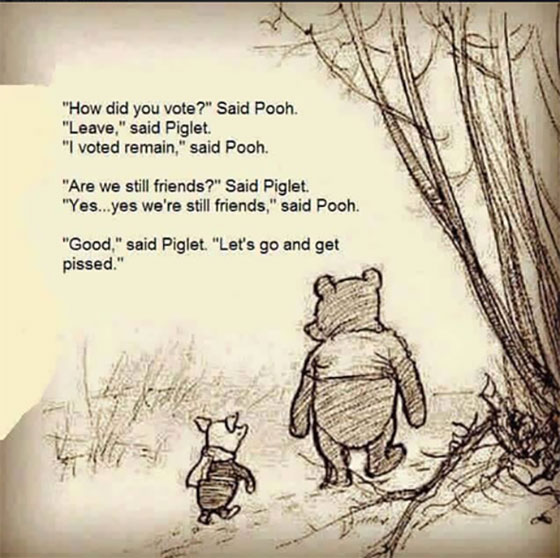 "If you stick a Winnie the Pooh picture on my Facebook page, you are dead to me," started James. "Little Piglet says we can still be friends? People are frightened and furious.

"You being upset because some friends of yours have been cross at you on Facebook? That's not what it feels like when you turn up at school and you're Romanian and someone's written on the toilet wall: go home to Romania."

WATCH: James On Why It's "Game Over" For Corbyn After Brexit

"How dare anybody suggest that we should be quiet about our concerns and our fears?

"The whole point of this whole debate was that people's concerns and fears hadn't been properly articulated or addressed.

"Now we're turning around within 72 hours of the results and telling everyone who's feeling a little bit bruised that their concerns and fears should be forgotten and overcome?

"Just think for a second about how mad that is!"

Brexit: The Most Popular Stories

Iain Dale: This Is What Theresa May MUST Do On Brexit

The Crucial Thing Leavers Missed When They Voted For Brexit