Images have been released by police of the fake suicide belts worn by the London Bridge terrorists.

The Met Police have released images of the fake explosive belts worn by the London Bridge terrorists.

All three of the attackers, Kharum Butt, Rachid Redouane, Youssef Zaghba, wore the belts during the attack on June 3. 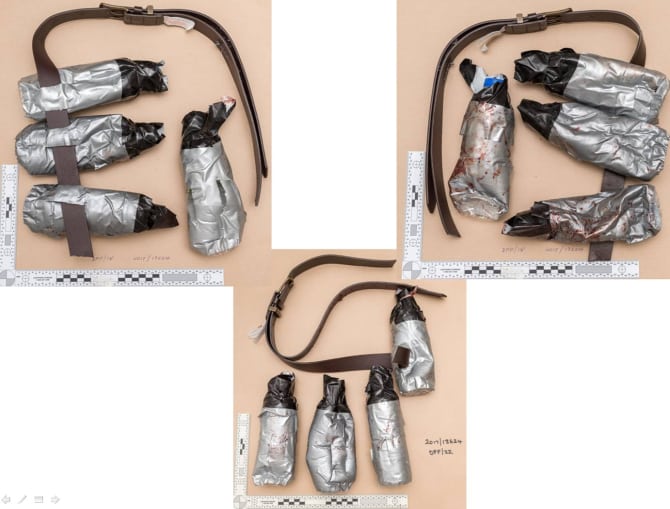 The belts feature water bottles covered in masking tape attached to the belt, which the attackers were still wearing when they were shot dead by police.

Commander Dean Haydon, who is leading the investigation, said: "I have not seen this tactic in the UK before where terrorists create maximum fear by strapping fake explosives to themselves.

"Anyone who saw them on the night would have thought they were genuine. It is hard to speculate what the motive was for wearing the belts.

"It could be that they had plans to take the attack in to a siege situation or it might be that they saw it as protection from being shot themselves.

"It makes the bravery of those police officers and members of the public who tackled the terrorists even more remarkable.

"The belt would have been visible to them and if you are fighting back or aiming a shot at someone wearing the device you would clearly be very aware that you could be caught in an explosion."

Police have spoken to 262 people from 19 different countries so far. Of these, 78 are significant witnesses.

Officers believe there will be many others who witnessed the incidents who have yet to speak to police,. They are asking them to come forward.

Anyone with information can call the police in confidence on 0800 789 321 or click here and complete a secure form.