WATCH: Trump On The "Bad Hombres" He'll Kick Out Of USA 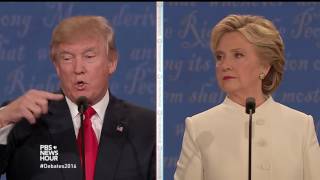 As last night's Presidential Debate turned to immigration, Donald Trump said his planned wall between the US and Mexico would help him kick the "bad hombres" out of America.

"We need strong borders," Trump said, "Hillary wants to give amnesty. She wants to have open borders.

The Republican candidate claims heroin "pours across our southern borders...poisoning the blood of our [American] youth.

"One of my first acts will be to get all of the drug lords, all of the bad ones, we have some bad bad people in this country that have to go out.

"We have some bad hombres here and we're going to get them out."