'It's The PM That Damaged Our Relationship With America, Not Bercow'

Alex Salmond says the Special Relationship is more damaged by Theresa May's rush to shake hands with Donald Trump than anything the Speaker could say.

Ed suggested to Salmond that the UK could suffer if Donald Trump decided to take offence at Bercow's comments about him.

"It's wrong for two reasons.

"One it's the wrong thing to do, to ingratiate yourself without taking the time and effort to see how things go and secondly...I can tell you from absolutel personal experience, you should never negotiate with Donald Trump from a position of weakness." 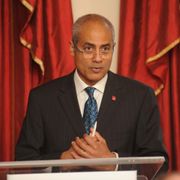