Andrew Pierce tells Femi Oluwole votes to take no-deal Brexit off the table were not legally binding, as the pro-Remain campaigner argues for a second referendum to break the parliamentary deadlock on leaving the European Union.

Our Future Our Choice co-founder told Andrew Pierce that "most Brexit voters expected a deal" but didn't like the one brought back.

But when the LBC presenter reminded him that the Brexit deal put on the table by Theresa May's negotiation team "is dead", the pair rowed.

Femi said: "That deal is the deal signed at the government level, it's still on the table. The EU said if you want to leave, you can with that deal."

Andrew disagreed, saying the deal wasn't on the table because it "wouldn't get through Parliament."

But Femi said: "No-deal isn't getting through Parliament either because Parliament opposes it.

"It's voted against no-deal several times."

Andrew replied: "But you know those votes were not binding, and Article 50 was binding."

Watch in full above. 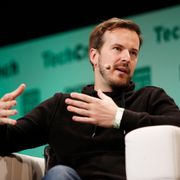