"Labour is one more mistake away from oblivion", says former Labour MP

The former MP for Tony Blair's seat thinks selecting another "far-left" leader would be "oblivion" for the Labour Party.

Phil Wilson, who used to be the MP for Sedgefield, accused Jeremy Corbyn of being the sort of leader who won't take responsibility for losing the election.

Wilson said: " think he should have stepped down. We could have had an interim leader."

He said the lack of an apology shows a "lack of professionalism and just points to the fact that Jeremy Corbyn at the end of the day wasn't really a leader."

He spoke about how disagreeing with the leader can lead to accusations of being a "red Tory".

Wilson continued: "I think it's not the right attitude that you need if you want a movement. That needs to be a broad church so that it can appeal to all kinds of people."

Matt Frei asked if the Labour Party can recover from the damage.

The former MP replied: "I think the Labour Party is one more mistake away from oblivion.

"We've just got to make sure we're selecting the right leader.

If we continue along the line of another leader who, you know, just perpetuates Corbynism or that kind of far-left kind of politics, I think what will happen is that maybe more people will turn away and those people who have already turned away, won't come back." 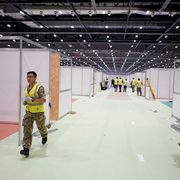