This is the heroic moment passers-by rushed to help a seven-year-old boy who had been run over by an out-of-control car by lifting it off him.

Remarkable footage filmed from a nearby house shows around 15 people heaving the two tonne Mercedes A Class off the youngster, before hauling him to safety.

The boy was involved in a collision at around 8.40pm on Sunday 7th May on St Peter's Road in the Highfields area of Leicester.

Police and paramedics dashed to the scene and the boy was taken to Queen's Medical Centre in nearby Nottingham. 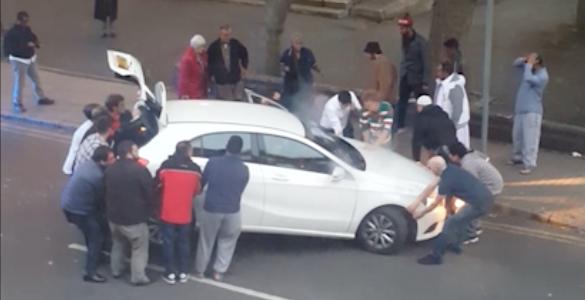 Vijay, who filmed the rescue, told the Leicester Mercury: "I had been dropped off at my girlfriend's house. I heard a bang outside and people shouting 'stop'.

"I took my phone up to a bedroom window and started recording in case it was needed for evidence. I caught the aftermath of the incident.

"I could see the boy trapped under the car. All of a sudden, people came from everywhere and started lifting the car off him. There were people who live in the area and people coming out of the church, they all came together.

"I couldn't believe how quickly the community came together to rescue the boy from underneath the car."