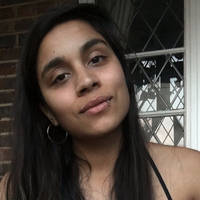 Police have launched an investigation after peaceful Black Lives Matter (BLM) protestors were told to "go back to Africa" during a demonstration in Hertfordshire on Monday.

Videos circulating on social media show a group shouting at BLM protestors near the Clock Tower in the rural town of Hoddesdon, Hertfordshire on Monday afternoon.

Hertfordshire constabulary said that an investigation has since been launched.

One of the protestors who attended told LBC: “There was at one point when the group that was there to cause trouble were making some sort of monkey sound.“There was a Nazi salute.

“When we were told to go down on our knees for nine minutes, for the time Floyd was pinned down for, they were making a lot of noise - it was really, really bad.”

Videos show the men being kept away from the protestors by a line of police, as they shouted obscenities.

A woman on a megaphone is heard saying, “We are here on a peaceful protest,” but her next words are drowned out by opposing profanity and shouting.

One of them, Alice, shot a video in which a man shouts at a protestor, “Why don’t you go back to Africa then?”

Alice, who filmed the incident, told LBC News: “They were chanting: ‘There’s only one Lee Ribgy.’ It was just very intimidating, having a large group, you know, they’re fully grown men - shouting at a group of young women and families.

“It was horrible… It makes me appreciate even more, how important this whole movement is.”

Herts BLM, who organised the event, posted on their Instagram page: "Thank you to everyone who came out and protested today.

"Though we had to directly face racists who tried to discredit our efforts, together we showed solidarity, letting Hoddesdon know that #blacklivesmatter."

Hertfordshire constabulary said in a statement: "An investigation is underway and we want to reassure you that the matter is being treated seriously with positive lines of enquiry being actively pursued.

"Our county is home to thousands of people from a wide variety of cultural backgrounds, and we want every single person to feel safe and supported by their police force.

"Recent events have made us more determined than ever to continue working closely with all of our communities, while learning and striving to deliver fair and proportionate policing for everyone.

"Difficult decisions sometimes have to be taken during large public gatherings, around how officers respond to spontaneous activity.

"Assessments are based on risk and public safety however this does not mean criminal acts will be tolerated or ignored. We are in the process of gathering evidence and will take appropriate action in due course."

Hertfordshire Constabulary Assistant Chief Constable Bill Jephson said: "We are aware of footage circulating on social media from the Black Lives Matter protest in Hoddesdon yesterday and fully understand the concerns that this has caused among members of the public.

“We understand that people of all ethnicities, throughout Hertfordshire and beyond rightly feel horrified about the death of George Floyd in America.

“We as a Constabulary stand shoulder to shoulder with those across the country, and indeed the world, who are both saddened and angered by the way Mr Floyd lost his life on the 25th of May.

“We will always challenge discrimination and racism wherever we find it and investigate crime reported to us and are taking action as a result of what happened in Hoddesdon yesterday.

“Our county is home to thousands of people from a wide variety of cultural backgrounds, and we want every single person to feel safe and supported by their police force.

“The right to protest is well established in this country, policing respects the right to free speech and indeed, has a role to facilitate protest.

“Recent events have made us more determined than ever to continue working closely with all of our communities, while learning and striving to deliver fair and proportionate policing for everyone.”