James O'Brien's Most Talked About Moments Of 2018

It has been a busy year for "the man who made radio viral". And as the Brexit debate intensifies, here are James O'Brien's best bits.

1. The James O’Brien Caller Who Voted Brexit Because Of Three-Pin Plugs

James O’Brien and LBC listeners alike were left in disbelief when this caller said he voted Brexit because he wants Britain to retain the three-pin plug.

Robert originally phoned up LBC to rail against the idea of a second referendum.

But when James asked what he thought he had won by voting to leave the EU, he said: "We can strip away from the EU laws we don’t like.

"One of the ones for me is the plug system - I know it’s not very hugely [sic] but we obviously use the three-pin in this country. The EU don’t."

A bemused James responded: “But we’re in the EU? So you think we have to leave the EU to get three-pin plugs?”

But when Bill called James O'Brien to admit that he was wrong to vote Leave during the EU Referendum, he sobbed as he asked: "What have I done to my country? I'm so sorry."

3. Van Driver Being Put Out Of Business By Brexit Calls James O’Brien

This was the moment a van driver gave a fascinating insight into how Brexit will affect business in Britain - leading some Brexiteers to admit they may have voted the wrong way.

Kieran told James O'Brien that his delivery company will go out of business almost immediately if Britain leaves the Customs Union.

He said that Brexit campaigners who say that frictionless borders are possible outside the Customs Union are liars, citing the huge amount of paperwork needed every time he delivers to Switzerland.

4. Leaver MP Calls James O'Brien To Tell Him Why Brexit Will Work

A Brexit-supporting Conservative MP called James O'Brien to try to tell him why leaving the European Union will benefit us - but it didn't go well.

James was left exasperated after the conversation with Marcus Fysh, who said: "Things in the medium term will be approximately where they are now."

When James asked about the short-term, Mr Fysh admitted: "Some things will be a bit less than they are now and some will be a bit more."

This is the remarkable James O'Brien clip in which he spoke to a Brexiteer who said he voted leave because his foreign neighbours are rude.

Timothy got increasingly infuriated during the comedic call with James, as he was constantly asked "How will your life improve after Brexit."

But when James asked again how it was going to change his life, he blurted out: "I won't have to deal with people like... you," before he let out a yelp that needs to be heard to be believed.

This Brexiteer stopped in the middle of an argument with James O'Brien to ask him to stop quoting facts at her.

Jean in Lowestoft is extremely passionate about the British fishing industry, having worked in it for most of her life.

As James O'Brien asked why fishing has become such a big issue for Brexit, Jean called up to explain why the Common Fisheries Policy is such a disaster for Britain.

But when James started quoting some figures that questioned some of her comments, she didn't like it.

7. Agonising Moment When Caller Tells James Brexit Is Will Of The People

This caller phoned James O'Brien insisting that Brexit is "the will of the people" and parliament shouldn't have the power to stop it, but it didn't end well.

Charles' call came the day after peers backed an amendment to the EU Withdrawal Bill giving MPs the power to stop the UK from leaving without a deal or to make Theresa May return to negotiations.

He told James: "Parliament is sovereign, but it gets its power from the people.

"I'll be cross if parliament is able to usurp the power that the people have invested in it. The people voted for Brexit."

But James asked him a simple question and it completely threw him: "Who elected the House of Commons?"

This caller suggested Irish people should be microchipped as one possible solution to the Brexit border issue - and James O’Brien’s reaction was savage.

Peter told James: “They only other solution is if that’s the case is you microchip.

“So you microchip the population so you know who is in there.”

9. James O'Brien's Analysis Of David Davis's "No Deal" Letter To Theresa May Is Devastating

James O'Brien was left with his head in his hands as he took apart David Davis' complaints that the EU is planning for a 'no deal Brexit' in characteristic style, and listeners loved it.

After a string of calls from business owners who face losing their companies after Brexit, an angry James O'Brien railed at the "throbbers" and "fraudsters" who led us here.

While discussing Britain's plans to leave the Customs Union, James got a call from Nick from Greenwich, who runs a multi-million pound heating and ventilation business that imports equipment from Europe.

That was the latest in a string of similar calls and it led James to lose his temper at the people in the media and politics who are still insisting they believe in Brexit.

LBC's top 10 of the decade: 5. "If Grenfell residents move into my flats, I'll move out" 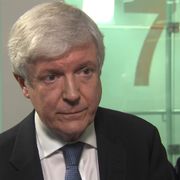