Simon Amstell and James O'Brien were both left in hysterics after he talked about performing his stand-up show while high on magic mushrooms.

The comedian and actor was James O'Brien's guest on his chart-topping podcast Full Disclosure this week.

And he explained how his comedy developed when he was trapped in the Thailand tsunami.

He said: "The first time this happened, it was after coming back from Thailand, where a friend of mine and I had been in a small part of the tsunami. A wave came and we were told to go up a hill just in case a second tsunami came.

"People starting coming up and giving out bread to the people on the hill and my friend say that she wasn't eating carbs!

"When I came home, I knew that was funny and I should tell that story on stage, but that's all I had. I knew I'd have to start right at the beginning - and telling the story, I realised that I was also not an ideal person to be in a tsunami and that my character was kind of ridiculous.

"So I started seeing how I could generate stuff from just talking about how stupid I am.

He then told the story of what happened when he thought magic mushrooms he had taken had worn off... but hadn't. Hear it in the video above or in Full Disclosure With James O'Brien.

Download the LBC app for iPhone and iPad, via Global Player

If you have an Amazon Alexa device you can enable the Global Player skill (by saying "open Global Player or visiting the skill store). Then all you have to do is say: "Ask Global Player to play Full Disclosure With James O'Brien podcast" 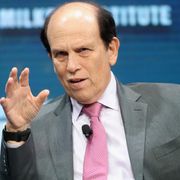