This Vice-Chancellor Explains Why He's Introducing A Drug-Free University

The University of Buckingham is working towards being the UK's first drug-free university as figures show drug-related disciplines rose by 40% in just two years.

Figures obtained through Freedom of Information requests show that more than 1,300 students were punished for drugs by British universities in the 2016-17 academic year, a 42% increase from 2014-15.

Kingston and Nottingham penalised more than 200 students since 2014-15, meanwhile universities including Leicester and City, University of London, did not take action in that time.

Sir Anthony Seldon said that Britain's universities are "failing" students on drugs and mental health, and should take more responsibility for them.

The Vice-Chancellor of the University of Buckingham says he is working towards creating the UK's first drug-free campus by making students sign a contract promising not to take drugs on university property or face expulsion. 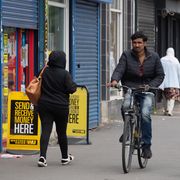