Reports of sexual impropriety have shaken Westminster in a week when the two main parties have revealed new complaints procedures.

Conservative MP Charlie Elphicke has been referred to police over what the party says are "serious allegations."

He denies any wrongdoing.

It's claimed he groped a female Labour activist at the party's annual conference three years ago.

And cabinet minister Sir Michael Fallon resigned from his post as defence secretary, hours after Downing Street was approached with claims of an alleged sexual assault.

She said: "What is flying around is a lot of innuendo, false accusations, accusations about activity that was entirely consensual.

"There are attempts going on to ruin reputations of good people.

"I'm very upset to see that my old colleague Michael Fallon has been forced to resign, I know what that can feel like.

"It's quite clear that he did nothing wrong."

Listen to the interview at the top of this page. 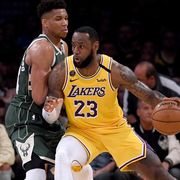