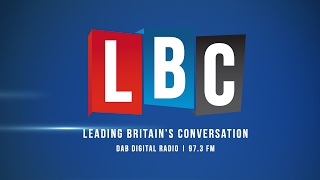 Live from Strasbourg, it's The Nigel Farage Show - exclusive to LBC. Watch the show live here and don't miss a moment.

Nigel is broadcasting from the European Parliament today but we'll bring you the whole show live, right here on LBC.co.uk. Alternatively you can join the debate on our LBC Facebook page.

As always, the show will feature an unmissable mixture of Nigel's opinion on the day's biggest news stories and your calls.