Detectives have released shocking footage of the moment a yob pushed a man into oncoming traffic during rush hour in central London.

UPDATE: Following this appeal, a man has contacted police and agreed to a voluntary interview.

The victim brushed shoulders with the man, before words were exchanged. The man then follows him and shoves him into the road from behind.

He falls into the road and only the sharp reflexes of the taxi driver of a an oncoming car slamming on the brakes saved him from serious injury.

Witnesses followed the suspect to confront him and one member of the public took this photo of the suspect.

The incident happened on New Bridge Street at around 8am on 23rd July this year.

Detective Constable Duff, from the City of London Police, said: "We would like to speak to anyone who witnessed this incident in July or who may know the man in the photograph.

"The quick thinking actions of the taxi driver undoubtedly prevented this incident having much more severe consequences for the victim. However he is still naturally shocked and horrified by what happened to him.

It brings back memories of the Putney Pusher video, where a jogger pushed a woman into the path of a double decker bus on Putney Bridge.

Police were unable to identify the man and it remains unsolved. 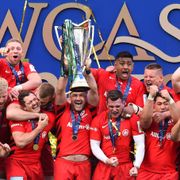