This is the moment a man was stabbed in a newsagent in central London after trying to break up a fight.

The incident happened in the early hours of Saturday 23rd September on Grays Inn Road.

After a disagreement between two groups of people, a 23-year-old man tried to act as a peacemaker.

But it turned nasty and two men chased him into a shop, one of them hitting him with a glass tube. The other stabbed him in the torso.

The victim was taken to an east London hospital where he was treated for a broken rib and a laceration to his lung. He has been discharged - but is still recovering from his injuries.

Detective Constable Joe Marston, of the Met's Central North CID, said: "The victim sustained serious injuries in what was a needless and incredibly violent attack. We would urge anyone who recognises these men to contact police as soon as possible." 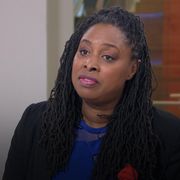