LBC has learned that Britain's rail-safety body wants to install monitoring devices in trains that constantly scan driver's faces and vibrate their chairs if they start to doze off.

The devices were first installed on the tram network in Croydon, in response to the fatal Sandilands crash two years ago. At the time, drivers voted to go on strike - eventually called off - complaining of dry eyes, blurred vision and headaches from the beams.

Now the Office of Rail and Road is starting to look at introducing the technology on other tram lines, as well as mainline trains.

Ian Prosser, the Director of Safety for the ORR, told LBC: "It's so important to remain vigilant and not be complacent, we do have arguably the safest railway in Europe, but you cannot stand still. And so it's so important to actually keep learning and keep that continuous improvement culture.

"It's still in the early stages but we are discussing it with the leaders in the industry. It's very important to talk to our trade union colleagues, and we have taken the General Secretary of ASLEF to see the system in Croydon. But we have developed a set of principles which we want to discuss with all partners in the industry - and do some pilots, and we're working on that as we speak."

ASLEF's General Secretary Mick Whelan is not impressed by the plans, telling LBC he thinks train drivers' reactions will be worse than when the Croydon members voted to strike last year. "We're not against anything that adds to safety, but the reality of this situation is that it doesn't.

“Basically you're spying on people for the sake of spying upon them without dealing with the core problem.

Drivers have reacted with anger at the idea. One Thameslink driver, who did not want to be named, told LBC: “It is an invasion of the little privacy that I have left in my driving cab. Why would the management want to watch me pick my nose, sing to myself, dance, drink coffee and eat my flaky Greggs sausage roll! It does nothing for increased passenger safety in my opinion.

"I'm also concerned with the infrared light shining in my face for 9 hours a day What are the health risks with this? We need to see much more data and the results of the research done on the trams.

"The trams don't have the safety devices like we do on the mainline so following Croydon tram crash this is a 'quick fix' knee-jerk reaction to reassure the travelling public that the bosses are doing something. We don't need it on the mainline.”

Sophie Nicholl from Seeing Machines insists the devices have already improved safety in vehicles across the world. She told LBC: "Seeing Machines’ Guardian is designed to enhance the safety of drivers and passengers in commercial fleets. Guardian technology is currently installed in over 11,500 vehicles worldwide, and is having a positive impact on safety.

"Independent studies have concluded that there are no health hazards associated with the technology, including exposure to the minimal levels of infrared used to track facial features."

Gary Cooper, the from the Rail Delivery Group said: "Britain’s railway is one of the safest in the world and everyone working in rail is committed to further improving safety. This includes seeing how we can harness the benefits of proven technology in discussion with our people and trade unions." 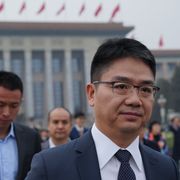