The moment a gang used a sawn-off shotgun to shoot a man in broad daylight on a Brixton street was captured on CCTV.

Police have released the shocking footage of the brazen attack as they seek help from the public to identify the suspects.

The incident happened around 7pm on Thursday, 12th May, with police being called to reports of gunfire on Marcella Road, in Brixton, south London.

CCTV from the area shows the victim, wearing a white shirt, waiting by the road while on the opposite corner three men dressed in black gather together. One pulls a sawn-off shotgun out of a bag and hands it to another. Their target then starts to run with the gang chasing after and shooting him.

The victim managed to keep on running and escaped down a side street while the gang fled down a different road, with the gunman, who took a bicycle that was parked up, pointing the shotgun at member of the public as he rode by.

Two people were hurt in the attack, with one man, aged 21, suffering a punctured lung and severe injuries to his windpipe, and another boy, aged 16 and on his way to the library, receiving a minor wound to his arm. Both have made a full recovery.

Police are now appealing for the public to help them find the suspects. Detective Constable Jo Ross said; "The 21-year-old victim was fortunate to recover from what were potentially life-threatening injuries at the time of the incident. Other passers-by were threatened by having a shotgun pointed at them - these are dangerous people.

"We are keen for the public to give us any information in relation to this appeal, who witnessed the incident or who recognises the suspects. It happened in broad daylight and in an area full of schoolchildren."

'Suspect 1' - a medium built black man in his 20s wearing a dark blue hooded top, black bandana over his face. He had a dark coloured bag over his shoulder and was wearing black and white gloves.

'Suspect 2' - a slim built black man in his 20s wearing a dark top with a large white Franklin and Marshall logo across the front, fur-lined hat with ear flaps, dark grey bandana and black trousers.

'Suspect 3' - a slim built black man in his 20s wearing a dark hooded top, baseball cap with a white mark on the peak and black gloves.

If you have any information about this incident you can call the police on 101 or call Crimestoppers anonymously on 0800 555 111. 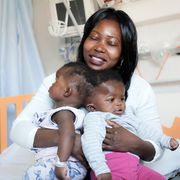