"The Queen Should Give Up A Palace To House Grenfell Victims"

An emotional local resident who went to see the Queen's visit to west London has told LBC she should be doing more to help those affected by the Grenfell Tower fire.

Corinne was in the crowd as the Queen and Prince William were heckled as they left their visit to the area in Ladbroke Grove.

She explained why people are so angry and called on the Queen to help re-house the people who have been left homeless.

Asked if the Queen could do more, Corinne told LBC: "How many properties has she got? Give up your palace and give it to the people who supported her when she had that fire at Windsor Castle.

"You asked for the taxpayer to pay.

"This is a situation where you can give something back to your people.

"Give one of your palaces up to the people who have got nowhere to live." 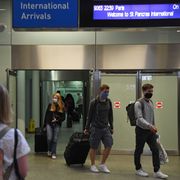 Coronavirus: Britons in scramble back from France as quarantine rules come into force

Coronavirus: Greencore factory staff 'surviving on £90 a week' after outbreak