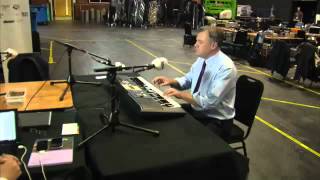 Ed Balls passed Iain Dale's piano challenge with flying colours after being put on the spot during an LBC interview.

The Shadow Chancellor recently passed his grade one exam on the instrument, taking the test alongside six-to-eight year olds - and even missing a press conference because of it.

After discussing his speech at the Labour Party Conference today, Iain Dale put a keyboard in front of him and asked him to give us a rendition of one of his exam pieces.

Watch how he got on.

M25 eco protesters: 'People who are angry at disruption should look at bigger picture'

'Everyone is aware of the crisis': Nick Ferrari clashes with an Insulate Britain supporter