What Would A No-Deal Brexit Would Look Like? We Asked A Former WTO Chief

A group of Conservative MPs are urging Theresa May to walk away from talks with the European Union and leave without a deal. But what would that look like?

With no trade deal, Britain would trade with the rest of the world on World Trade Organisation (WTO) rules.

We asked Pascal Lamy, the Former General Director of the WTO what that would mean.

What would being on WTO rules actually mean?

If you look at the way people trade, you have basically two options. The WTO option is the one-size-fits-all option, a multi-lateral trade regime which almost all countries on the planet have accepted. It's about tariffs.

Then, more open than the WTO is a bilateral agreement, like the EU with Japan or India or Canada.

And then you have a special open plus plus plus system, which is the EU internal market.

So level playing field WTO, more open bilateral, even more open EU regime. The UK is exiting the EU, so it's a choice between the WTO or a better-than-WTO regime.

For example, on WTO rules, there is a 10% tariff on cars. You can have a bi-lateral agreement where you have a 0% tariff, which would obviously be better. That would be true for cheese, for lamb, for whisky, for anything.

What would happen if the UK goes on WTO rules?

The WTO rules are definitely second-best, or to be precise, the second-worst.

Going on to WTO rules is not the end of the world, but more costly trade, meaning less jobs.

How many countries use WTO rules?

WTO rules are used by everybody. The WTO has 150 members but is not a uniform system, so some countries have agreed deals to have different tariffs. But it is the system that exists and the system we can rely on.

It is not as good as the UK's current system. It's not the end of the world, but it just makes life more complex.

How do you foresee Britain's trading prospects post-Brexit?

The UK will have to renegotiate the deals which they already have with 60-80 countries which are better than the WTO regime - these are the bi-lateral deals the EU has with these countries.

This, of course, will take time.

And it's not certain that the UK will get the same deal that the EU has with these countries.

So the capacity to negotiate as a single country, the deal will be not as good as the EU deal. 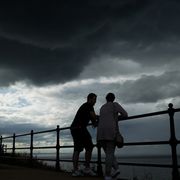