Tomorrow the government are expected to make a final decision on whether to use Chinese tech giant Huawei's equipment to build the UK's 5G network.

The US is urging the Prime Minister to use other suppliers over concerns of national security due to the tech giant's links to the Chinese government.

However Huawei has stated it would never take orders from the Chinese government.

LBC's political editor Theo Usherwood explained that the tech company, if chosen, would be building "non-core aspects of the network" which is why government advisers are insisting the risk of hacking "can be managed."

Boris Johnson has stated that he will listen to the top technology and intelligence officials at tomorrow's National Security Council but Theo said the likelihood is Boris Johnson is going to continue with the use of using Huawei.

"To cancel that aspect of the contract would lead to delays," he said, "the cost is put at around £7 billion because they'd have to find another firm to step in."

The UK has a momentous decision ahead on 5G. British MP Tom Tugendhat gets it right: “The truth is that only nations able to protect their data will be sovereign.” https://t.co/8lLEUEUxdL

Conversely, the US Secretary of State Mike Pompeo endorsed Tory MP Tom Tugendhat's opposition to the use of Huawei which read, “The truth is that only nations able to protect their data will be sovereign.”

Mr Tugendhat told LBC's Nick Ferrari his concerns: that while the UK's IT resources will be dedicated to essentially being a "guard" against Chinese hacking, there will be no one in the UK devoting time to technological innovation.

Coronavirus: What do the figures tell us about Boris Johnson's chances of a full recovery? 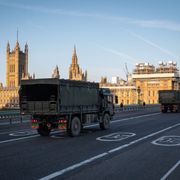