Brushing Past Weed In Enfield Cause Huge Blisters

These are the shocking burns a dog walker suffered after brushing past a weed at a country park in Enfield.

Ann Quinlan walked past the giant hogweed plants at Forty Hall in north London and later that evening, felt a tingling in her leg.

She was then rushed to hospital early the next morning when she woke in agony with huge blisters the size of fists on her thigh and lower leg.

Doctors were flummoxed by her condition, until a junior doctor googled her symptoms.

Ann still takes 14 tablets a day to reduce the swelling and has the change the dressing on the raw wound on her leg every day.

It will be weeks until she can return to work and doctors warned her it may take months before her leg has fully healed.

Giant Hogweed: How Does It Burn You

Chemicals in the plant cause photodermatitis, which makes the skin especially sensitive to sunlight. This means you can suffer serious sunburn, blistering and long-lasting scars.

Just brushing against or touching the plant is enough to release the sap and the burns start within 24 hours.

If the sap comes into contact with the eyes, it can cause temporary or permanent blindness. Anyone who touches the weed should wash the area with soap and water, then cover it up to stop it reacting to sunlight. 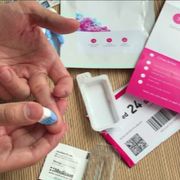