David Mellor: The future of Germany and France for the next few years is suddenly a lot clearer - and it could be very good news for Britain and Brexit.

The shape of the new EU became more apparent this weekend, with François Fillon well ahead in the race to become the centre right candidate for the French Presidency (effectively the next President), and Angela Merkel announcing she will indeed stand again for Chancellor in next year’s German elections.

The defeat of the ghastly ex-President Sarkozy, a strutting turkey cock with nothing to commend him beyond blind ambition, is good news for Britain as well as for France. Here is a man who would play any card to secure support and abusing “Les Rosbif” alongside Muslim women, was as good as it got from him.

But the apparent defeat, to be confirmed next Sunday, of Alain Juppé is equally good news.

Juppé too, though an alleged moderate, was not above playing the anti-Brit card, threatening to move border controls from Calais to Dover, thereby showing little or no appreciation that it’s not our fault that a lot of people turn up in France wanting to come here, and, for whatever reason, don’t want to stay in France.

At 71, with a Hilary Clinton-like murky background, which involved a suspended sentence in 2004 for putting party workers on the public payroll in Paris, Juppé is as stale as last week’s croissant and as smelly as an over-ripe Camembert. 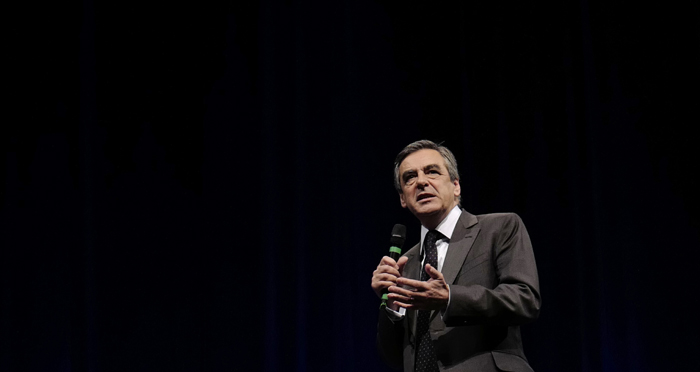 Fillon, above, who almost won outright yesterday, will surely beat Juppé next weekend. And, as an admirer of Margaret Thatcher, with a Welsh wife and a longstanding reputation as an Anglophile, he’s surely someone we can do business with.

And at 62 he isn’t totally clapped out, unlike the other two.

Merkel’s announcement is based on polling evidence that despite her massive pratfall over migration, she can still win. This is as much a sign of the dearth of credible alternatives, than any commendation of Merkel herself. But she’s good for Britain because, she can, if she chooses, sort out Brexit, either by making us an offer we can’t refuse, (something I have always thought likely in the fullness of time), or ensure the terms for exit are not too damaging.

Because of course terms that are ruinous for Britain would also be damaging to Germany, our major trading partner, which owns a huge slice of the British economy.

She’s too sensible to want to form the circular firing squad so desired by the dreadful Mr Juncker. With a fresh mandate, she will surely find the political will to exert herself, beginning with forcing Juncker’s resignation someone she didn’t really want in that key job anyway.

The huffing and puffing of President Hollande can now safely be ignored.  He is still apparently wondering whether to run, but a Sarkozy type humiliation is all that awaits him if he does.

In recent weeks our Brexit team has looked a bit shambolic but they can take heart from this weekend’s events. A decent deal, whether to leave, or to stay on much improved terms, can now be seen, albeit through a glass, darkly.

Unvaccinated must 'think again' about the impacts of their actions, says Sir Keir Starmer

More than 50 houses evacuated after 'suspicious items' discovered by police

Hundreds release balloons in memory of little Arthur, 6, to 'show he was loved'

Omicron may be less dangerous than Delta, says US health official