You've heard them say it in Thunderbirds: "F.A.B.". But what does that actually mean?

In Thunderbirds, what does F.A.B stand for?
Tim, Wimbledon

** Self-Definitive **
Name: James O’Brien
Qualification: I’ve interviewed Gerry Anderson
Answer: The creator of Thunderbirds told in an interview that it didn’t mean a thing. He just made it up.

** Definitive **
Name: Derek, Maida Vale
Qualification: Huge Thunderbirds fan
Answer: I used to collect all Thunderbirds comic books and in one issue only, FAB stood For Always Brothers. I once won a competition in Smash Hits magazine with this very answer!
(James O’Brien: But your comic probably wasn’t written by Gerry Anderson)

Name: David, Chelmsford
Qualification: Overheard it from Gerry Anderson’s son on a plane journey
Answer: It means Fully Audible Broadcast.
(James O’Brien: I’m not buying it. I’ve got it from the horse’s mouth!) 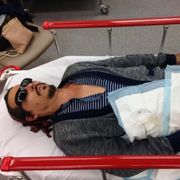