'Computer says no': Sunak blames IT systems for not raising benefits

Chancellor Rishi Sunak has blamed old IT systems for not raising benefits more at the spring statement.

Mr Sunak explained that he had discussed a higher rise than the 3.1 per cent given but was told there could only be an uplift once a year for people on some benefits.

He acknowledged that his answer "sounds like an excuse" but insisted he had been "constrained somewhat by the operation of the welfare system".

"The operation of our welfare system is technically complicated," Mr Sunak told Bloomberg.

"It is not necessarily possible to [increase benefits] for everybody.

"Many of the systems are built so it can only be done once a year, and the decision was taken quite a while ago."

When asked about the furlough scheme, which was developed within a few weeks, Mr Sunak said: "The welfare system works in a very different way and constrained somewhat by the operation of the welfare system so it can't be done for everybody in that way. But we are still supporting people."

"So, for example, we've very much strengthened the incentives to work, the rewards for work with the National Living Wage and Universal Credit taper rate for example."

Read more: Shop prices rise at highest rate in more than a decade

The Chancellor has since faced a backlash over the comment, with shadow work and pensions secretary Jonathan Ashworth labelling it "pathetic".

He said: "In negotiations over original lockdown legislation we & @The_TUC insisted on increased help through Universal Credit. We won that increase.

"Ministers later took away £20 - the biggest single cut to social security ever.

"Shame Sunak's computer didn't say no to that."

A Government spokesperson said: "Since 1987, we have consistently used September's inflation figure to make the decision on benefit uprating including in cases where benefits are increased beyond the rate of inflation at the point at which the rise kicks in, as happened in 2012, 2015 and 2020.

"However, we recognise the pressures on the cost of living and are taking targeted steps to help, including spending £22 billion across the next financial year to support people with energy bills and cut fuel duty.

"For the hardest hit, we're putting an average of £1,000 more per year into the pockets of working families on Universal Credit, have also boosted the minimum wage by more than £1,000 a year for full-time workers and our Household Support Fund is there to help with the cost of everyday essentials.

"Universal Credit is a dynamic system which adjusts as people earn more or less, and simplifies our safety net for those who cannot work.

"The six benefits it is replacing all have complex and inefficient paper-based systems that are slowed further by ageing, inflexible IT, taking several months to process changes that Universal Credit could make in weeks." 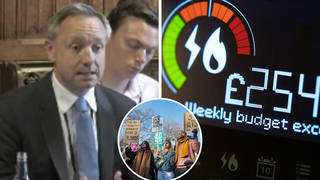 Iran building collapse kills 11 as mayor and others detained