A hosepipe ban is set to be imposed for southern England next week after a lack of rainfall and extreme temperatures hit the UK.

The ban will cover Hampshire and the Isle of Wight from Friday 5 August 2022, Southern Water announced.

The company said record-breaking temperatures, along with the UK seeing one of the driest years for a century, have caused a drought that "threatens to damage the precious habitats of the River Test and River Itchen".

However, Southern Water has sought to reassure customers, saying there is no direct risk to water supply.

Under the restrictions, using hosepipes to water gardens or clean cars is banned and ornamental ponds and swimming pools must not be filled.

If you'll be paddling this weekend, why not fill it up halfway, or use what’s left on plants? #ReduceYourUse pic.twitter.com/qZGHRsEsq3

Dr Alison Hoyle, Director of Risk & Compliance at Southern Water, said river flows are down 25 per cent as a result of one of the driest years on record.

She explained: "We haven't taken this decision lightly and we know the temporary use ban will have an impact on our customers.

"We're asking everyone in Hampshire and the Isle of Wight to do their bit by supporting these measures and only use the water that they need.

"We’re experiencing one of the driest years on record for over a century and we’ve seen record temperatures.

"River flows are approximately 25% lower than they should be for July, which is equivalent to losing more than 25 million bathtubs of water.

"We're asking our customers to help protect our rivers and the habitats that live there by cutting back their water use.

"We believe a Temporary Use Ban is a responsible and vital step to reducing the amount of water being taken from the Rivers Test and Itchen." 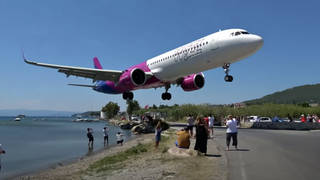 Physics teacher, 34, who kissed pupil, 17, in nightclub allowed to return to teaching

Victims of burglary being failed by police and 'not getting justice they deserve', watchdog says

In Pictures: How people in Budapest are keeping cool amidst heatwave