School day 'could be lengthened to help Covid catch-up'

The Government is considering plans to lengthen the school day to help children catch up from the disruption of the pandemic, it has been reported.

The Daily Telegraph said that officials at the Department for Education (DfE) are considering multiple proposals to help children try and recover lost learning due to school closures.

This could include charities and volunteers running out-of-hours classes and extra-curricular activities, meaning teachers may not be required to stay late.

DfE officials are reportedly examining the cost-effectiveness and evidence of adding extra classes at the start and end of the day.

Robert Halfon, chairman of the Education Select Committee, told the paper: "They are definitely considering all these ideas. I think they are receptive and thinking about it seriously."

The Department for Education did not comment on the proposals but a Government spokesperson said: "We will invest a further £300 million in tutoring programmes, building on the existing £1 billion Covid Catch-Up Fund, but the Prime Minister has been clear that extended schools closures have had a huge impact on pupils' education, which will take more than a year to make up.

"The Government will work with parents, teachers and schools to develop a long-term plan to make sure pupils have the chance to make up their lost education over the course of this parliament - and we have just appointed Sir Kevan Collins to the role of Education Recovery Commissioner, to specifically oversee this issue."

The reported proposals come amid ongoing concerns over the impact of the pandemic on children's education and welfare.

Children's commissioner for England Anne Longfield said: "What we all realise now is the impact on children of not being in school, both educationally and in terms of their wellbeing, is absolutely immense, and one that we hadn't really anticipated in the first instance - but now, a year on, is very clear to see."

She added: "The pressure now on getting that catch-up in place, getting children to the point where they can start to get their confidence back and rebuild, really needs to start in huge earnest.

"Which is why I'm really pushing for not only a kind of one-year catch-up, but something that will go over the next two to three years to try to get children, as many as possible, not only back to where they should have been, but also ahead."

The Prime Minister has confirmed school closures in England would be extended until at least March 8.

The devolved administrations in Wales and Scotland have both announced that some primary schools year groups will return by February 22. 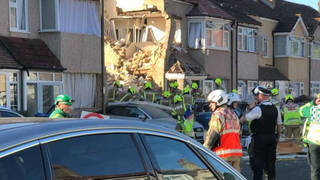