The 90-year-old blasted off on the Blue Origin shortly after 3.45pm (BST) - after the launch was delayed by 15 minutes.

The actor, who played Captain James T Kirk in the Star Trek films and TV series, said he "hopes he never recovers" from the experience.

He told reporters after landing safely back on earth: "I hope I can maintain what I feel now. I don't want to lose it. It's so much larger than me and life.

"It was so moving to me. This experience is something unbelievable."

The capsule - owned by Amazon boss Jeff Bezos - launched from a Texas spaceport and the trip lasted about 10 minutes.

Liftoff! #NewShepard has cleared the tower with astronauts on board for the second time. #NS18

Mr Bezos' space travel company, Blue Origin, invited Shatner on the brief jaunt to the fringes of the final frontier, which will make him the oldest person in space.

The capsule has reached apogee - stay tuned for official confirmation of altitude for today’s flight. Our astronauts are now experiencing amazing views of Earth through #NewShepard’s massive windows. #NS18

It was Blue Origin's second passenger flight, using the same capsule and rocket that Mr Bezos used for his own launch three months ago.

The rocket and capsule system, known as New Shepard, is fully automatic.

According to a live stream of the historic event, Shatner and his fellow passengers reached an altitude of roughly 350,000ft and a velocity of about 2,000mph.

The trip lasted just 10 minutes, with the fully automated capsule reaching a maximum altitude of about 66 miles before parachuting back into the desert.

Mr Shatner and the rest of the crew landed safely back on earth shortly after 4pm (BST). 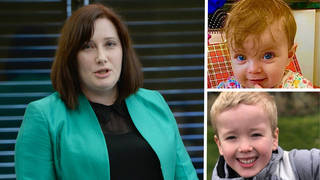 Is the party over for Boris? PM faces fresh outrage over lockdown 'birthday bash'

Student kills one and wounds three in shooting at German university