Brexit: Brits celebrate up and down the country as UK leaves Europe

There were jubilant scenes across the UK as Britain left the European Union after 47 years.

Up and down the country people were filmed celebrating in the streets, in pubs and joyful Brexiteers took part in a bash at Parliament Square led by Nigel Farage.

The Brexit clock counted down to zero at 11pm and was projected onto the front of No10 four years after the UK voted to leave.

At 10pm the Prime Minister released a pre-recorded video to the nation where he hailed the arrival of Brexit as a new dawn for Great Britain.

Prime Minister Boris Johnson acknowledged there could be "bumps in the road" as the country enters a new era, but he insisted that Brexit can "unleash the full potential" of the UK.

Mr Johnson accepted there would be mixed feelings in a nation that remains deeply divided after years of bitter Brexit battles.

"For many people this is an astonishing moment of hope, a moment they thought would never come," he said."And there are many of course who feel a sense of anxiety and loss."Britain has now entered an 11-month transition period with the EU, during which time the government needs to strike a trade deal before December.

Nigel Farage said: 'There is one thing above all we must celebrate tonight and it is this. The reason we are here tonight is because Westminster became detached from the people in this country. 'The people have beaten the establishment. The real winner tonight is democracy. And I am someone who believes we should be pro-Europe, but not the European Union.'

People were singing God Save the Queen and Land of Hope and Glory in Trafalgar Square as drummers played.

A band also took to the stage with a rendition of Tom Jones’s It’s Not Unusual.

On a day filled with symbolic moments:

- The Cabinet met in Sunderland, the first city to declare in favour of Brexit when the 2016 results were announced

- A 50p coin to mark the occasion entered circulation.

Boris Johnson symbolically held a Cabinet in Sunderland, the first city to declare a majority for leave in the 2016 referendum

European Commission president Ursula von der Leyen said: "We want to have the best possible relationship with the United Kingdom, but it will never be as good as membership."

The Prime Minister hosted a reception in Number 10 for senior ministers, officials and supporters of Vote Leave who quaffed English sparkling wine while a countdown clock beamed onto the building ticked down the minutes until 11pm.

Nigel Farage told cheering crowds at the Brexit celebration rally in Parliament Square: "We did it. We transformed the landscape of our country

He added: "The people have beaten the establishment. The real winner tonight is democracy. And I am someone who believes we should be pro-Europe, but not the European Union."

In Scotland, which voted to stay in the EU in the 2016 referendum, rallies and candlelit vigils took place as activists sought to send a message to the EU to keep open a place for Scotland.

In Northern Ireland, the campaign group Border Communities Against Brexit staged a series of protests in Armagh, near to the border with the Republic of Ireland.

Meanwhile leaders across Europe gave their reactions to the first country leaving the EU.

German Chancellor Angela Merkel said Brexit was "a deep break for us all" and warned the "negotiations will certainly not be easy".

French President Emmanuel Macron said Brexit was an "alarm signal" for the EU and hit out at the "lies, exaggerations, simplifications" that led to the Leave vote.

'We can't tell how severe it will get': Markets panic over the coronavirus

'Are you real?': Vladimir Putin quizzed on body double rumours

Coronavirus: UK schools could shut for two months if virus becomes 'out of control' 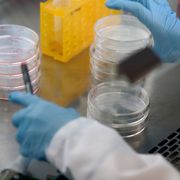