Christmas has been ruined for one family after a B&Q lorry smashed into their home in Essex.

The articulated lorry smashed into the corner of the house in Canon's Gate in Harlow in the early hours of Tuesday morning, waking resident David Hill with a “tremendous thud.”

The top corner of the house has been smashed, with the lorry left wedged precariously in the side of the home.

The lorry smashed into his daughters' bedroom but luckily they had gone to spend the night with their mother when the crash happened.

Mr Hill told LBC News: “It was about 3.15 this morning, my wife and myself were in bed in the back bedroom.

“We heard a tremendous thud, came down the stairs and realised the corner of the house was missing.

“We gathered some bits, got dressed and came outside, because we didn’t know if the building was safe or not. From there, we’ve just been waiting.

“The driver was able to climb out, he wasn’t injured either, but we’re in limbo at the moment.

“He was speaking to the police at the time but we don’t know the full details of what’s happened.

“We couldn’t even guess what it was when we heard the noise, we had no idea at all, but it was a shock. It’s a bit of the unknown what happens next.

“We were able to get back into the house to get our two cats and gather a few items but other than that I don’t know.

“I think we can go in but the front door is a bit demolished to say the least.”

Mr Hill said it would have “a lot worse” if his daughters had been at the house at the time, with their bunk beds visible in the spot where the huge lorry crashed.

He added: “The kids live with their mum and come round here at weekends but it’s not an ideal situation.

“If they were here then it would have been a lot worse, thank God they weren’t.

“No time of year is good for this to happen but yeah, everything for Christmas is downstairs – presents are done, wrapped, tree is up, and we had plans to host family for Christmas as well so we’ve had to ask if we can go somewhere else.

“We’ve got family in Enfield so we’re probably going to be staying with them.”

Asked when the family would be able to return home, he said: “At the moment we don’t know. When the lorry gets moved, then we can see the extent of the work that needs doing.

“The lorry is getting dealt with at the moment – certain companies are having meetings and they’re gonna go from there.”

In a statement, Essex Police said: “We were called at around 3.30am today, Tuesday 17 December, with reports an artic lorry had collided with a building in Canons Gate, Harlow.

“There were no reported injuries, however, there was extensive damage to the property and a structural engineer was called.

“The driver assisted us with our enquiries and there were no reported offences.”

B&Q said in a statement: “B&Q and Wincanton, our fleet operators, are cooperating fully with the police to understand what happened. Our heartfelt apologies go to the Hill family and we will support them however we can.”

Essex Police said: “We were called at around 3.30am today, Tuesday 17 December, with reports an artic lorry had collided with a building in Canons Gate, Harlow.

“There were no reported injuries, however, there was extensive damage to the property and a structural engineer was called.

“The driver assisted us with our enquiries and there were no reported offences.”

Harlow Council said in a statement: "Following the impact the structure has been deemed dangerous by our building control team and is under further investigation.

“Once the lorry is removed later today a full assessment of the damage can take place. We know this is a difficult time for the owners after what happened this morning.

“We have spoken to them and we will remain in close contact.

“Officers will stay on site as a precaution until more is known about the damage and the action which can be taken to make the property safe." 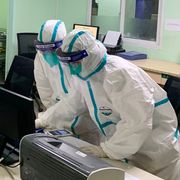