Ministers are speaking to energy firms about rising gas prices, which has prompted fears it could lead to the collapse of smaller providers who supply millions.

Reports say the taxpayer could end up footing a multibillion pound bill to subsidise the supply of energy to those customers whose providers collapse.

The Times said there could be dozens who go under – with four firms having already folded. Bulb, which provides energy to 1.7 million customers in the UK, is looking for a bailout through investors or a joint venture.

Boris Johnson has pledged to do "everything we can" to stop companies collapsing.

Gas prices have risen by 250% since January, and 70% in August alone, according to OGUK, which represents offshore oil and gas companies.

Read more: 'Customers will be protected if energy companies go under'

Blame has been attributed to a cold winter which depleted stocks, high demand for liquefied natural gas in Asia and reduced supplies from Russia.

Mr Johnson compared the situation to "everybody going back to put the kettle on at the end of a TV programme".

He said: "I think people should be reassured in the sense that yes there are a lot of short-term problems not just in our country, the UK, but around the world caused by gas supplies and shortages of all kinds.

"This is really a function of the world economy waking up after Covid.

"We've got to try and fix it as fast as we can, make sure we have the supplies we want, make sure we don't allow the companies we rely on to go under. We'll have to do everything we can.

"But this will get better as the market starts to sort itself out, as the world economy gets back on its feet."

Business secretary Kwasi Kwarteng said "well-rehearsed plans" were on hand to ensure people do not get cut off.

He accepted customers were enduring a "worrying time" but he was confident supplies would be maintained and said they would be protected from sudden price rises by the energy price cap.

"Our priority is to protect consumers. If a supplier of last resort is not possible, a special administrator would be appointed by Ofgem and the Government," he said.

"The objective is to continue supply to customers until the company can be rescued or customers moved to new suppliers."

The Financial Times, meanwhile, reported that the industry wants a "bad bank" to absorb unprofitable customers from firms that collapse.

It said Bulb was looking to raise funds from investors or through a joint venture or merge with another company.

A Bulb spokesperson said: "From time to time we explore various opportunities to fund our business plans and further our mission to lower bills and lower CO2.

"Like everyone in the industry, we're monitoring wholesale prices and their impact on our business." 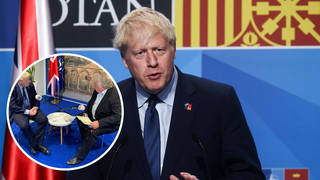