The demolition of Grenfell Tower is set to go ahead more than four years after the devastating blaze which claimed 72 lives.

Engineering experts are said to have "unanimously" advised the government to demolish the tower "carefully," with one person who lost relatives in the blaze telling LBC he thinks the sight of the tower brings "bad memories" to those responsible for the terrible loss of life.

The tower has stood covered in a white shroud bearing the slogan "forever in our hearts" as a monument to the victims who lost their lives in the inferno on 14 June 2017.

It is feared the structure could pose a safety risk if it is left standing, according to the Sunday Times.

Read more: Ex-council leader 'desperately sorry for everybody who was in tower'

A final decision is expected to be made later this month.

Housing Secretary Robert Jenrick has reportedly been warned the building poses a particular risk to nearby Kensington Aldridge Academy, a secondary school for 1,200 children.

The fire was caused by a malfunctioning fridge-freezer. It spread, fatally trapping dozens of people on the upper floors.

More than 250 firefighters and 70 fire engines were sent to quell the blaze.

The Grenfell Tower fire became the deadliest residential fire in the UK since the Second World War and kick-started a national scandal with thousands of people trapped in now unsellable homes and saddle with huge bills for replacing cladding that could pose a similar fire risk.

Nabil Choucair, who lost his mum, sister, brother-in-law and three young nieces in the fire, told LBC: "They have always wanted to do it.

"We have an agreement with them saying that unless we have something that we know we would like to put up, it shouldn't go down."

He said he believed the demolition was a political move as it brings "bad memories" to those who presided over the tragedy.

"They can't keep looking at it and it brings them bad memories," he said.

"We want a second opinion. We are still waiting for someone independent to make out whether it is as bad as they make it out to be."

He said victims don't want a memorial garden or a park. He said he felt the victims' families should be asked what should replace the tower and suggested a museum memorial should be placed on the site.

"We want to get things moving but we want to make sure it's right, and fit for everybody," he said. 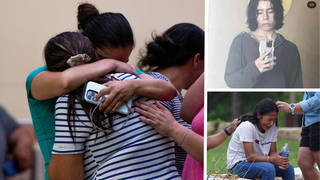