Russia has let slip that 10,000 soldiers have been killed in the country's invasion of Ukraine - far higher than official tolls.

Pro-Kremlin newspaper Komsomolskaya Pravda swiftly took down an online article revealing thousands of troops had died and over 16,000 were injured, but screenshots of the report still exist.

It led to questions over whether the outlet was hacked or if it obtained true figures and managed to post them.

The article said 9,861 soldiers had died in the invasion, which has turned into a now month-long war.

That figure is far higher than the toll of 498 given by Russian authorities at the start of March.

Read more: 50 Ukrainian orphans due to fly to UK stranded in Poland after paperwork blunder

Read more: Boris 'desperate' to go to Kyiv as he has an 'emotional connection' with Ukrainian people

Real figures of casualties in the war have been hard to verify. The CIA estimated with "low confidence" that up to 4,000 Russian soldiers could have been killed by 8 March. Ukraine said on March 12 it had lost 1,300 troops.

Ukraine has previously accused Russia of refusing to take back its dead amid reports its military could use mobile crematoria to cover up the scale of their losses.

The MoD said Russian forces, on Day 27 of the invasion, were “largely stalled” in other parts of Ukraine.

The Russian state article came as US president Joe Biden warned an increasingly desperate Vladimir Putin could resort to more brutal means to wage a war, which has not gone as the Kremlin hoped.

He warned that false Russian remarks about US or Ukrainian chemical and biological weapons were a sign the Russian leader was contemplating using them himself.

Read more: No survivors found after plane nosedives into mountainside in China

Warning businesses to guarantee their cyber security, Mr Biden said: "One of the tools he's most likely to use is cyberattacks.

"The magnitude of Russia's cyber capacity is fairly consequential and it's coming."

The US's deputy national security adviser Anne Neuberger warned of Russia examining websites for any weaknesses in what she described as "preparatory activity".

In the physical war, Ukraine continues to mount a tough resistance against Russia.

Much of the focus has been concentrated on Mariupol, the besieged southern city seen as crucial for the Kremlin if it wants to open up a land corridor between the pro-Russian separatist forces in the eastern Donbass region and Crimea, which Moscow seized from Ukraine in 2014.

Repeated warnings of a humanitarian disaster in the city have been issued as Russia pummels the city with strikes.

The UK's Ministry of Defence said on Tuesday morning: "Despite heavy fighting, Ukrainian forces continue to repulse Russian attempts to occupy the southern city of Mariupol.

"Russian forces elsewhere in Ukraine have endured yet another day of limited progress with most forces largely stalled in place.

"Several Ukrainian cities continue to suffer heavy Russian air and artillery bombardment with the UN reporting that more than 10 million Ukrainians are now internally displaced as a result of Russia's invasion."

Russia's attacks in Mariupol and the rest of Ukraine have horrified the world.

It has struck hospitals, including a children's and maternity facility, while people died in shelling against the capital Kyiv on Sunday night. 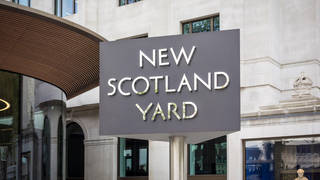 Serving Met officer charged with rape by another force