More than 100 people from Scotland have signed up to support Ukraine against Russian president Vladimir Putin's invasion, according to officials.

The Consulate of Ukraine, based in Edinburgh, announced a number of people had enlisted in the effort to end the invasion of Ukraine by Russian military forces.

Ukrainian president Volodymyr Zelenskyy has urged foreigners to "join the defence of security in Europe."

"Everyone who wants to join the defence of security in Europe and the world may come and stand shoulder to shoulder with Ukrainians against the invaders of the 21st Century."

Mr Zelenskyy has temporarily lifted the requirement for entry visas for any foreigner willing to join Ukraine's International Defence Legion - a volunteer military unit designed to push back against Russian forces.

This comes as Russia has intensified its attacks on major cities in Ukraine - including besieging the port city of Mariupol.

Many people have gone to the Ukrainian embassy in London to declare their interest in supporting Ukraine's military.

Gym owner Leon Dawson said he was prepared to lose his life fighting in the country's newly formed International Legion.

"They look like they need help," said Dawson, in quotes reported by Euro News. "We don't want to die. We're obviously scared. But if we're scared, we can imagine how the innocent women and children feel. I can't sit here and just let that happen."

Asked if his family were aware, Mr Dawson, who has no military experience, said: "My family are upset. Obviously it is a hard time."

Brian Grove, a former member of the Territorial Army, said he is "ready to get on a flight tomorrow".

He joked: "I'm 60, which means I'm just about within the age range they will accept."

But First Minister Nicola Sturgeon said that any person wishing to travel should "think carefully about what we can do to support Ukraine that is actually helpful and meaningful".

She said she will not encourage people with no military experience to fight for Ukraine. Ms Sturgeon added: "I am not sure that would be the best way to help Ukraine at this particular moment."

This comes after Foreign Secretary Liz Truss said she supports individuals from the UK who might want to go to Ukraine to join the military action.

She told the BBC: "I do support that [British people travelling to fight in Ukraine]. That is something that people can make their own decisions about - the people of Ukraine are fighting for freedom and democracy not just for Ukraine, but for the whole of Europe."

Ms Truss was later criticised for her comments on people joining the Ukrainian forces. The Prime Minister's official spokesperson distanced Downing Street from the comments.

Read More: Defence sec clashes with Liz Truss as he tells untrained Brits not to fight in Ukraine

They said the government felt "the best way we can help Ukraine right now is by ensuring Putin fails" after being asked if they agreed with the comments made by Ms Truss.

The spokesperson later urged people to check the Foreign Office travel advice, which warns "against all travel to Ukraine".

Jason Luck who has family in Ukraine, was set to fly to the conflict on Wednesday. He previously served for 12 years in the British Army.

The Daily Mail reported he said: "My family are in Ukraine. They're in the east of the country. I've got my partner, her boy, my daughter.

"Fighting isn't my priority. My family is my priority. I live in Surrey, but go back and forwards. First it was the pandemic, now this."

Mr Luck, who is in his late 40s, refused an offer from Ukrainian authorities to pay for his flights.

"I'm going out Wednesday. I need to. I'm really worried. I've got a twisted feeling in my stomach."

Defence Secretary Ben Wallace, who served in the Scots Guard, echoed the warnings for British people not to travel to Ukraine.

"I think there are better ways for you to contribute to the security of Ukraine." 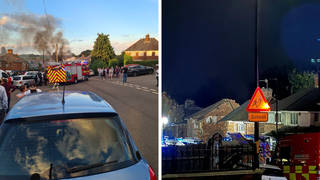