It's been confirmed this week's crippling rail strikes will go ahead after last-minute talks failed to resolve a row over pay.

The RMT Union's says last-ditch talks with the Government failed to resolve a row over pay, jobs and conditions.

General secretary Mick Lynch accused the Government of "actively preventing" a settlement and said the union found proposals put to it to be "unacceptable".

Speaking outside the RMT's headquarters near Euston station in London, Mr Lynch said he could not see a settlement being reached until employers could "negotiate freely".

He said: "What we have come to understand is that the dead hand of this Tory Government is all over this dispute and the fingerprints of Grant Shapps and the DNA of Rishi Sunak are all over the problems on the railway and indeed the problems in this society.

Read more: Everything you need to know about this week's rail strikes

"And until they allow these employers to negotiate freely, I can't see that we are going to get a settlement to the issues that are in front of us."

Transport Secretary Grant Shapps told MPs: "We are now less than eight hours away from the biggest railway strike since 1989.

"A strike orchestrated by some of the best-paid union barons representing some of the better-paid workers in this country, which will cause misery and chaos to millions of commuters.

"This weekend we've seen union leaders use all the tricks in the book to confuse, obfuscate, to mislead the public.

"Not only do they wish to drag the railway back to the 1970s, they're also employing the tactics of bygone unions too - deflecting accountability for their strikes onto others, attempting to shift the blame for their action which will cause disruption and cause damage to millions of people, and claiming that others are somehow preventing an agreement to their negotiation."

Downing Street has warned it will be "extremely difficult" commuting during the rail strikes as more than 50% of the rail network will be shut.

It said it was "deeply disappointing" that the strikes are going ahead, arguing that they will not resolve the issues faced on the railways.

"Striking does nothing to address the long-standing issues that we need to sort to make sure our railway, that the public use and treasure, is fit for the long term," a spokesperson said.

"For those that have no choice but to come in it will be extremely difficult tomorrow and I think the public will understandably want to know why they are being put in this position.

"We believe we are seeking to offer a fair and reasonable pay rise and modernise the railway services for the long term, and we need to get rid of some of these outdated rules and procedures, some of which have not been updated for decades and which don't serve the public."

The RMT called on its members to "stand firm, support the action, mount the pickets and demonstrate their willingness to fight for workplace justice".

The union said it remains available for discussions to settle this dispute.

In a statement, the RMT added: "The rail companies have now proposed pay rates that are massively under the relevant rates of inflation, coming on top of the pay freezes of the past few years.

"Faced with such an aggressive agenda of cuts to jobs, conditions, pay and pensions, RMT has no choice but to defend our members industrially to stop this race to the bottom."

RMT staff will be walking out on Tuesday, Thursday and Saturday but there will be a reduced service for the entire week, with passengers urged to only travel via train if absolutely necessary.

Considerable disruption is expected, with festival goers, GCSE students and holidaymakers among millions whose plans risk being scuppered - made worse by soaring petrol prices.

If you're travelling to or from places with no services - such as Bournemouth, Swansea, Holyhead and Chester - you won't be able to get a train and you should find alternative ways of travelling.

If you're not in one of these areas, you are advised to avoid travelling by train if you can but there will be reduced services if you need them.

Passengers who must travel are urged to plan ahead to ensure that they can complete their journeys within the window, with last services from London to Scotland, for example, leaving in the early afternoon. 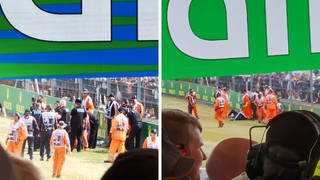