The Prime Minister said: "On behalf of the entire Government, I tell you this: we will not rest until we've increased the successful prosecutions for rape.

"Because too many lying, bullying, cowardly men are using the law's delay to get away with violence against women, and we cannot and will not stand for it."

READ MORE: Boris Johnson: I will tackle 'underlying problems' when no other Govt had the 'guts' to

Mr Johnson has previously admitted that rape victims are badly served in this country, with rape convictions at an all time low and issues compounded by a huge backlog of cases in the courts due to cuts and Covid-19.

The murder of Sarah Everard by police officer Wayne Couzens has put issues around women's safety in the spotlight and Home Secretary Priti Patel has announced an independent inquiry to look at the case.

The PM's words came after he appeared to rejected calls for misogyny to be made a hate crime on Tuesday.

Justice Secretary Dominic Raab echoed that view earlier today, telling LBC misogyny should not be a specific crime and the focus should instead be on enforcing laws that are already in place.

When quizzed by Nick Ferrari, Dominic Raab said most misogynistic acts are already criminal offences under other laws.

"I think the things people are talking about are already criminal offences under the public order act and therefore rather than create new legislative offences where there are already a sufficient criminal base, our focus out to be on solving the problem," he said.

"The problem is one of enforcement, not that there isn't enough law."

He also told BBC Breakfast misogyny is "absolutely wrong, whether it's a man against a woman or a woman against a man".

Misogyny is hatred aimed at women, not men.

She said: "It's little wonder the Conservatives are failing to tackle misogyny when their Justice Secretary doesn't even seem to know what it is.

"These comments are an insult to the millions of women and girls impacted by misogyny and show just how out of touch the Conservatives are on this issue. "

The inquiry into Ms Everard's case announced by Ms Patel will be made up of two parts - the first examining Couzens' previous behaviour and whether warning signs were missed during his time in the police.

The second will look at any specific problems raised by the first part of the inquiry, which could include wider issues across policing - such as vetting practices, professional standards and discipline, and workplace behaviour.

Couzens was a serving Metropolitan Police officer at the time he kidnapped, raped and murdered the 33-year-old marketing executive in March.

He had been linked to a flashing incident in 2015 and two others just days before he killed Ms Everard. 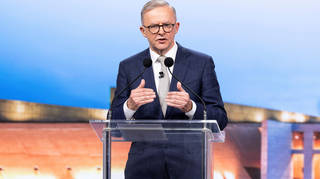 Opposition Labour Party on course for victory in Australian election