France has resumed administering AstraZeneca Covid-19 jabs but today issued guidance that only those over the age of 55 should have it.

Prime Minister Boris Johnson, who is 55, is due to get his own Covid-19 vaccination - the AstraZeneca jab - later this afternoon.

From midnight tonight Paris - along with 15 other regions in France - will go into a strict new coronavirus lockdown for a month as a third wave of the virus sweeps Europe.

Prime minister Jean Castex says Covid variants have put his country in a third wave. Schools will remain open but all non-essential shops will have to close.

The French medical regulator ruled the jab could resume, but said it should only be given to people aged 55 and older.

France previously only allowed the jab to be given to those under 65 claiming there was not enough data to show it was effective in older people.

Yesterday both the UK regulator and the European Medicines Agency said that the Oxford/AstraZeneca jab had no proven link to extremely rare incidents of a type of blood clot on the brain.

Earlier today a senior scientific adviser warned the UK must keep out the South African Covid-19 variant as some European countries report a third wave of infections.

Professor Neil Ferguson, from Imperial College London, said a group of European countries are seeing increasing levels of cases, albeit driven by the Kent variant.

"Perhaps more concern for the UK though is that some countries are notably seeing a significant fraction, 5-10% of cases, of the South African variant.

"That is the variant we really do want to keep out of the UK."

A spokesman for Boris Johnson said the UK had "strong measures" at the border when asked whether the Government was concerned about rising Covid rates in France and other European countries. 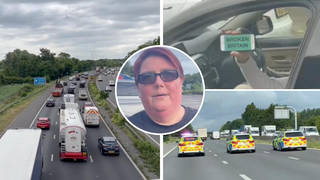