The UK's Brexit minister has hit back at France after it threatened to cut off Britain's energy supply amid a row over fishing licences.

Lord Frost reminded France of the need to be "proportionate" as he argued it was "unreasonable" to suggest the UK was acting in bad faith when allocating post-Brexit fishing licences to French boats.

He claimed London had been "extremely generous" to European Union requests.

France's Europe minister Clement Beaune said earlier it would "take European or national measures to exert pressure on the UK" after a series of application rejections to fish in British waters.

The UK government announced last month that it had approved just 12 of the 47 applications it had received from French small boats.

Anger was further stoked in a later announcement by the Jersey government that of 170 licence applications it had received from French boats, 75 had been rejected.

Mr Beaune told French radio station Europe 1 that the Trade and Co-operation Agreement which formed part of the Brexit divorce deal should be "implemented fully", threatening action if it was not.

Asked about possible retaliations, Mr Beaune pointed to both UK exports to France and European energy exports to the UK.

He said: "The UK depends on our energy exports, they think they can live alone while also beating up on Europe and, given that it doesn't work, they engage in aggressive one-upmanship."

Just under half of the UK's electricity imports, as of 2020, come from France.

But Lord Frost accused the country of being disingenuous over the UK's position on fishing access.

He told a Conservative Party conference fringe event: "We have granted 98% of the licence applications from EU boats to fish in our waters according to the different criteria in the Trade and Co-operation Agreement, so we do not accept that we are not abiding by that agreement.

"We have been extremely generous and the French, focusing in on a small category of boats and claiming we have behaved unreasonably, I think is not really a fair reflection of the efforts we have made."

The cabinet minister conceded Britain "would have liked a different sort of fisheries deal" in the Brexit deal but said the UK was striving to deliver on the agreed terms.

"We agreed this deal and we are implementing in good faith, so I think it is unreasonable to suggest we are not," he continued.

"If there is a reaction from France, they will have to persuade others in the EU to go along with it, and it does need to be proportionate."

It is not the first time the French have used the energy supply threat to try to gain ground in the Brexit row.

In May, French maritime minister Annick Girardin warned France was ready to take "retaliatory measures" after accusing Jersey of dragging its feet over the issuing of licences to French boats.

Jersey gets 95% of its electricity supply from France.

A spokeswoman for the Government of Jersey said: "Jersey has followed the process set down by the Trade and Co-operation Agreement throughout the process of allocating licences.

"Jersey's electricity service is underpinned by a long-term contract with EDF and we do not anticipate any interruptions in supply." 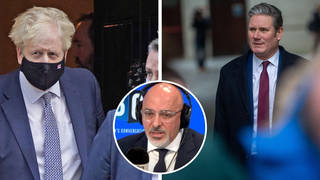 'Boris said sorry, Keir should too': Zahawi blasts Labour leader as he defends PM over Partygate