Rescues and evacuations have been carried out in northern Italy, after towns around the famous Lake Como were hit by mudslides and flooding.

Firefighters carried out more than 60 rescues after storms wreaked havoc around the picturesque lake ringed by mountains.

No deaths or injuries were reported, but videos showed cars floating away as streets turned into rivers and mudslides barrelled through towns.

It follows storms further south on Monday near the city of Bologna, which saw hailstones the size of tennis balls cause damage to hundreds of cars.

A video posted by the Centro Meteo Emilia Romagna showed a sea of hailstones falling onto a residential area, while another showed queues of traffic stopped on the motorway inspecting cracked windscreens.

Brienno, on Lake Como's western shore, was the hardest hit town, with 50 residents trapped in their home when a landslide caused a gas leak.

An apartment building in Cernobbio was also evacuated after it was threatened with flooding.

Meanwhile, mudslides cut off a multiple elderly people and their carers, who had to be rescued by firefighters.

After Central Europe, storms and flooding have now moved south of the Alps. This is my hometown, Lake Como pic.twitter.com/YpDzMtf5dP

The extreme weather in northern Italy follows the deadly flooding in central Europe, China and India.

The devastating floods killed over 180 people in Germany and Belgium alone, after rapidly rising water caused houses to be washed away.

Italian agricultural lobby group Coldiretti said the country was experiencing "the consequences of climate change, with a trend toward tropicalisation and the multiplication of extreme events."

They estimate over 14 billion euros (£12 billion) of damage has been caused over the last decade to agriculture production, buildings and infrastructure because of climate change-provoked events like flooding and landslides.

Its analysis found hailstorms are occurring at the rate of 11 a day this summer, with 386 so far this year.

"The dimension of the hailstones also has changed, growing considerably in the last years with real ice blocks falling from the sky - even bigger than tennis balls," the group said.

Hail can wipe out entire fields or orchards, with Coldiretti blaming "this crazy climate" for a 40% drop in peach and apricot harvests and a 50% drop in nectarines. 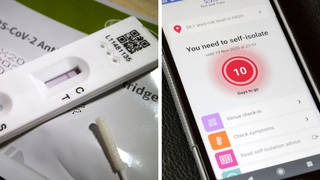 Ayr explosion: Family of four in serious condition after blast at house