Sir Keir Starmer took aim at Boris Johnson and his government labelling him "a trivial man" and "a showman with nothing left to show" in a major speech at the Labour Party conference today.

Sir Keir took aim at the government and its handling of multiple scandals during Covid-19 crisis in his keynote speech in Brighton. He said the current government was "lost in the woods".

He also highlighted how ordinary Brits face a cost of living crisis, and the current fuel crisis, in his speech to delegates on the conference's final day.

After Mr Starmer insisted that "what this country needs is a serious leader", a heckler could be heard shouting: "Where is Peter Mandelson?"

Dissenters in the hall could also be seen holding red cards while others stood and cheered on the Labour leader.

Read more: 'I wouldn’t have used the words she used': Starmer on Rayner calling Tories 'scum'

Labour activist Carole Vincent, one of those who heckled Sir Keir Starmer during his party conference speech, said she expected him to face a leadership challenge before the next party conference.

She said she didn't consider what she was doing as "heckling", and instead explained she was merely "standing up and speaking out because it needed to be said".

"He talked about uniting the party, the party has never been so divided as it is now and it's getting worse," she said.

"I probably will be expelled and that's sad because I work bloody hard for this party."

Asked whether she thinks the Labour party is still a socialist democratic party, she said "it is moving further and further to the right".

"As we show racism the red card in football, I'm showing him [Sir Keir Starmer] the red card when he said something that I thought is not acceptable."

Despite being attacked by hecklers, the party leader appeared confident as he said to cheers from the audience: "Shouting slogans or changing lives, conference."

Sir Keir addressed the party's "devoted activists" and "loyal voters" and said they saved the party from "obliteration" under Jeremy Corbyn's reign.

"This is our first full conference since the 2019 general election in which we suffered our worst defeat since 1935," said Mr Starmer.

"To our devoted activists and loyal voters I want to say loud and clear. You saved this party from obliteration and we will never forget it. Thank you.

"To those Labour voters who said their grandparents would turn in their graves, that they couldn’t trust us with high office, to those who reluctantly chose the Tories because they didn’t believe our promises were credible. To the voters who thought we were unpatriotic or irresponsible or that we looked down on them, I say these simple but powerful words.

"We will never under my leadership go into an election with a manifesto that is not a serious plan for government."

Mr Starmer also used his first speech to address the petrol shortage and the government's handling of the crisis, which he further criticised.

He said: "If you go outside and walk along the seafront, it won't be long before you come to a petrol station which has no fuel. Level up? You can't even fill up.

"Doesn't that just tell you everything about this government? Ignoring the problem, blaming someone else, then coming up with a half-baked solution."

Another of Sir Keir's attacks against the Tory government was a swipe at the Home Secretary Priti Patel, and her handling of football fans booing England players.

The Labour leader told the conference: "When the Government ignored Marcus Rashford's campaign on school meals, I was shocked.

"But I couldn't believe it when Rashford and the England team took the knee to highlight and condemn the racism they have had to endure, the Home Secretary encouraged people to boo.

"Well, here in this conference hall we are patriots.

"When we discuss the fine young men and women who represent all our nations, we don't boo. We get to our feet and we cheer."

He further outlined the party's plans on economic credibility, education, being tough on crime, investing in health, getting people into work and how urgent action on the climate crisis is needed.

Speaking about climate change, Mr Starmer described the issue as the biggest of our time, adding: "Time is short, it is our duty to act."

"This is a question of security," he said.

"It is a test of justice at a global scale - climate change poses an existential threat."

He pledged that the party would introduce a 'Clean Air Act', ensuring everything they do in government will have to meet a “net zero” test to ensure that the prosperity Labour enjoys "does not come at the cost of the climate".

He told Labour's party conference it will be Labour's national mission over the next decade to upgrade our homes.

"The Tories inherited plans from Labour to make every new home zero carbon, they scrapped them and now we have a crisis in energy prices, emissions from homes have increased and we have the least energy-efficient housing in Europe," he told delegates.

"So, it will be Labour's national mission over the next decade to fit out every home that needs it, to make sure it is warm, well-insulated and costs less to heat, and we will create thousands of jobs in the process."

As he drew his speech - which lasted over 90 minutes - to a close, Sir Keir added that work, care, equality and security were "British values".

"I think of them as the values that take you right to the heart of the British public, that is where this party must always be."

He said those values were "the tools of my trade" and closed his speech by saying: "And with them, I will go to work." 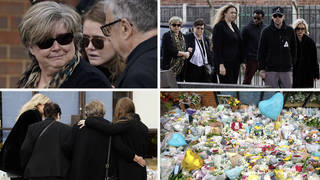