What are the Christmas Covid rules for England, Scotland, Wales and Northern Ireland and how do they differ?

Boris Johnson insisted today there is "unanimous agreement" across the four UK nations "that we should proceed in principle with the existing regulations" for Christmas.

It comes after the government faced increasing pressure to rethink its five day "Christmas bubble" plan for the whole of the UK, which will next week see up to three households allowed to mix indoors.

However, Scotland and Wales both broke ranks with new advice, with Welsh First Minister Mark Drakeford announcing a three-week lockdown will start on December 28, and saying the number of households forming bubbles should be cut to two.

And Nicola Sturgeon today urged families to stay at home or meet outside over the festive period, and minimise socialising with other households to just one door.

But what are the rules and how do they differ for each nation of the UK?

The current rules in place for England mean that:

- Between 23 and 27 December, you can form a "Christmas bubble" comprised of people from three households

- You can only meet in homes, places of worship or public outdoor spaces - not pubs or restaurants

At a press conference, the Prime Minister said should "think hard" before meeting family and friends over the festive period, Boris Johnson said as he urged people to have a "merry little Christmas".

He told a press conference that a "smaller Christmas is going to be a safer Christmas" and also suggested people should cut short their celebrations rather than enjoy the maximum permitted five days in a festive bubble.

An information campaign is expected to be launched in the days running up to Christmas, with people being urged to think carefully about bubbling with elderly or at-risk relatives.

First Minister Mark Drakeford has announced that the planned five days of relaxed measures will remain in place following talks between the four UK nations - but Christmas Bubbles will be reduced to two households over this period.

Just hours later, he said that the two-bubble rule will be written into law rather than just being guidance.

He also said that Wales will go into full lockdown from December 28.

The Welsh Labour leader said a "sustained rise in coronavirus" meant that the country would have to move into its highest level of restrictions.

He announced tighter restrictions for household mixing, staying-at-home, holiday accommodation and travel will only apply from December 28, with the planned easing of Covid restrictions over Christmas remaining in place between December 23 and 27.

Some measures will come into force on Christmas Eve with all non-essential retail, including close contact services and all leisure and fitness centres forced to close from the end of the day.

All hospitality premises will be forced to close from 6pm on Christmas Day.

Scotland's First Minister Nicola Sturgeon said her "strong recommendation" was that people should spend Christmas "in your own home with your own household", and if they did mix with others they should not do so for the entire five-day period.

She added: "We will set out advice if you are living in any of the nations in one of the highest level of protection - which in England and London is tier three - then we don't think you should be travelling to other parts of the UK."

She also broke rank with the government by asking people to only meet up with their Christmas bubbles for one day and not stay overnight.

Rules in Northern Ireland are currently the same as in England, meaning three households can "bubble up", with no changes expected before Christmas.

However, a spokeswoman for Northern Ireland's First Minister Arlene Foster and Deputy First Minister Michelle O'Neill said they would be holding discussions with their medical and scientific advisers.

Arlene Foster also said people needed to take “all and every precaution” when they come together at Christmas.

Mrs Foster also said she could not rule out further restrictions after the Christmas relaxations end on December 28.

She added: “Unfortunately the last two weeks don’t appear to have brought the R number down below 1, there is a diminishing return in terms of restrictions, people are out and about now and so there is a very great need for people to have personal responsibility." 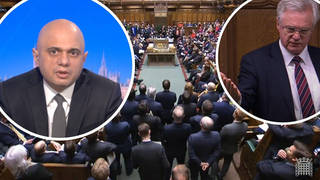 'Omicron is in retreat': Javid says we'll live with Covid like flu as Plan B scrapped

Biden admits nation is weary from Covid, but US in a better place