'Her legacy burns like an eternal flame': Father's moving speech at 9/11 memorial

The father of Sara Low, a flight attendant, has given a moving tribute to her as the 20th anniversary commemorations of the 9/11 terror attack begin, describing her actions as "selfless" and "heroic".

Crowds have gathered at the site where the World Trade Centre towers stood to commemorate the twentieth anniversary of the 9/11 terror attacks in which 2,977 people lost their lives.

Mike Low, father of 28-year-old Sara Low, opened the service, paying tribute the sacrifice that his daughter, emergency service workers, and many civilians made.

Sara was a flight attendant on board the first plane to hit the two towers.

Mr Low said: "Today this is a quiet day of memory."

He added: "A father’s pride in a daughter’s selfless acts in the last moments of her life, acting with heroic calm, to help those in the air, and those on the ground. A legacy from Sara that burns like an eternal flame."

Sara had memorised their calling card number, which she was able to give to another flight attendant so that crucial information could be relayed to crews on the ground after the plane had been hijacked.

Prior to the start of the service, a bell was rung to signal the first of six planned minutes of silence. The silences will take place at the moments that the planes crashed, and then again as the towers fell.

Leaders from all over the world have paid their respects, and current and former political giants have gathered at the site of the memorial in New York.

Joe Biden, Barack Obama and Bill Clinton are all among those attending.

The US flag was paraded through those gathered at Ground Zero, the site where the towers stood, before the NYC Young People's Chorus opened the service by singing the national anthem.

Read more: 'My thoughts are with the victims': Queen's message to Joe Biden on 9/11 anniversary

The flag featured tears and rips, which commemorate the torn flag that was recovered from the wreckage of the World Trade Center site.

Mike Low then stepped forward to speak, before family members of those killed began reading out the names of those who lost their lives.

On September 11 2001, four commercial flights flying from the north eastern US to California were hijacked mid-flight.

A total of nineteen hijackers, all with terrorist group al Qaida, were involved in the attack.

Their goal was to crash the four flights into prominent US buildings, damaging or destroying them and causing mass casualties.

Commemorations at the site will continue for the next few hours. 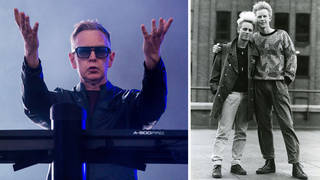