The Jubilee weekend will start off with bright sunshine and high temperatures for many, but the second half of the bank holiday could see rain and thunderstorms.

With a four-day weekend about to begin, many Brits are hoping to celebrate the Platinum Jubilee with street parties, picnics and garden parties.

The weather is expected to get off to a good start - on Thursday, most of the UK will see warm, dry weather, with the exception of Northern Ireland and some of western Scotland where there could be some showers.

Read more: Irresponsible to quit now over Partygate, says PM as he denies being ‘habitual liar’

London will see highs of about 22C, and whilst it will be cooler elsewhere it will likely feel warmer in the sun.

Friday will also be a warm day, with temperatures of 23C expected in London.

But as the day rolls on the weather could get more unsettled, with parts of Northern Ireland, Wales and southwest England likely to see some showers.

There is then the possibility of overnight rain due to a plume of warm air.

That same plume could wreak havoc for outdoor plans on Saturday by causing showery outbreaks throughout the weekend - but it is not yet known how far north the rain will extend.

The weather looks mostly good for the start of the Jubilee weekend, although there will be rain for Northern Ireland ☀️🌤️🌨️#HM70 #PlatinumJubilee

Here is the latest forecast...👇 pic.twitter.com/bCcsbxXgFz

Whilst northern parts of the UK will likely see dry weather with some sunny spells, there is the possibility of thunderstorms in the south.

On Sunday it is a similar picture, with the possibility of thundery showers in the south as the more settled weather remains up north.

But, despite the cloud, UV is expected to be high from Thursday onwards - so don't forget to pack your sun cream.

"The main source of uncertainty for the weekend itself is to do with how far a plume of warm air, currently across the continent, encroaches over southern areas of the UK from late on Friday.

Read more: Your guide to the Queen's Platinum Jubilee

Which day of the long weekend will have the best weather where you are?

Here is the latest forecast...

Find out more at https://t.co/HnIV2PM43x

"The latest outlook suggests that this plume of warm air could bring a spell of showers to southern areas overnight on Friday and into early Saturday, with some showers hanging around for a time on Saturday.

Read more: Ready for the party: Royal superfans camp out in London 48-hours before Platinum Jubilee

"Further showers are likely for southern areas on Sunday, perhaps the odd heavy one, most likely at this stage for the far southeast. 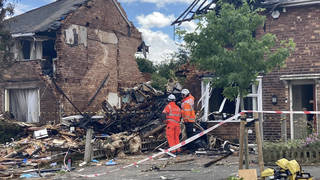 G7 leaders to commit to Ukraine, with US pledging advanced missile system