This caller directed the on-air conversation to football after the debate centred around CEO pay only being cut by 36 of the UK's biggest companies during the pandemic.

Chris phoned in from Somerset to give his view on the news that only 36 of 100 of the UK's top companies cut their Chief Executive's pay during the pandemic.

He guided Iain Dale onto news coming from North London that Arsenal football club plan to make more than 50 people redundant because of losses made during the pandemic.

"These are ordinary folks," Chris began. He told Iain that he couldn't see why these people are made redundant when the club pays some players hundreds of thousands of pounds a week.

"It's an absolute disgrace."

Iain understood the argument. "It does seem very odd that someone can be earning tens of thousands – hundreds of thousands a week, and then the football club are making so called "ordinary people" redundant."

The caller scoffed at the thought that we're all supposed to be going through the pandemic together. "It appears that some people are in it more than others."

"The chief execs are frankly getting away with murder," Chris said, adding that "we can see what's coming down the track," in terms of mass unemployment and inequality due to the pandemic.

"The way things are going I'll end up voting Labour," he joked.

Iain wondered in the case of Arsenal, owned by an American billionaire, "can't the billionaire temporarily put his hands in his pockets?" 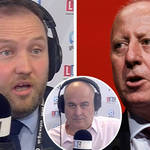 'I can't take my daughter to school': Mother shares toll of fuel fiasco on her family